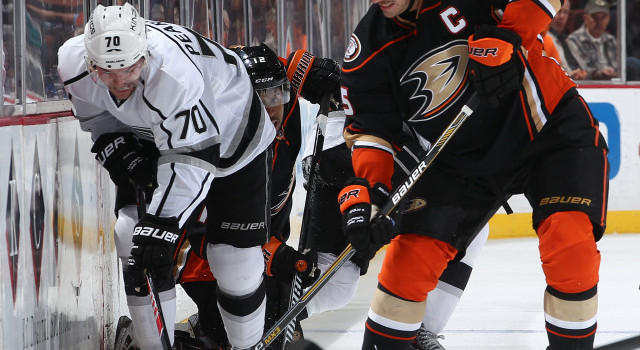 Knee deep in the 2013 Western Conference Final, Darryl Sutter was asked about the pressure facing a then-21-year-old Tyler Toffoli in his debut postseason performance.

The quote ended up as a footnote on The Quotable Darryl Sutter, 2013 and became applicable again when Toffoli, along with Tanner Pearson and Kyle Clifford, didn’t receive any shifts after the second period of Wednesday’s 6-5 shootout loss in Anaheim.

Pearson, who logged only eight minutes of ice time in the loss, understood that Sutter’s actions spoke louder than any words.

“I think everyone is smart enough in here that if you’re not playing, you kind of know what it’s for,” he said. “He doesn’t really need to address it. You try to come in today and forget about yesterday and move on.”

Sutter said that last night’s game felt like a “pond hockey” game and that against a “big, physical team” the Kings would “have to be prepared to play like that.”

“I think I was just losing battles, wherever they were,” Pearson said. “That’s what I’m trusted to do out there, win battles. When you’re not doing that, I guess you’re probably not going to play.”

While speaking with LA Kings Insider earlier today, Sutter reinforced several of those points when asked about the team’s high number of shots allowed.

“When it’s a free puck, you have to be a much more determined group along the walls and make better decisions,” he said.

Sutter never directly addressed particulars of Toffoli and Pearson’s play, other than referencing Anaheim’s physical style – and, obviously, given that the two forwards have combined for 27 points and a plus-25 rating through 16 games, any thorough dissection of their play is overwhelmingly positive.

“I think when you don’t play for a full period, you have to take that and get motivated and play better or you’re not going to play,” he said.

“But I wasn’t on top of my game yesterday and that’s what happens when you’re not on top of it, you’re not going to play. I’ve got to bounce back tonight with a good game and try to contribute.”