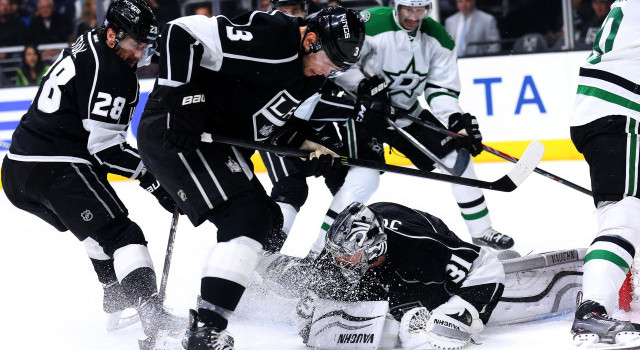 Justin Williams, on the team’s performance:
We chased the game. We chased it from the first period on. On a back-to-back that’s tough, but it just simply wasn’t good enough. There wasn’t enough fight and our power play wasn’t great as well. We didn’t score a big goal like we needed tonight. Sometimes you need that.

Williams, on whether Dallas’ first goal changed the momentum of the game:
You can’t dwell on little things like that. There are things like that throughout the game. There are little plays here and there, actually everywhere on the ice that have an impact on the game. That was a big one. But in the big picture, grand scheme of things, it wasn’t good enough.

Williams, on the rhythm of the game:
The flow was kind of weird, awkward. I don’t know what else to say. It just wasn’t there. We chased the game all night and didn’t have any sustained pressure.

Williams, on adjustments the team needs to make:
Our power play has got to score some big goals for us at some point, if not goals then momentum. I don’t know. We’ll get better.

Tyler Toffoli, on whether his physical play:
I was just trying to get in the game, trying to help our team win and just doing whatever I can to help.

Toffoli, on what adjustments the team needs to make against Anaheim on Saturday:
We’ve got to come out hard and use our crowd to the advantage. The crowd is going to be very good. We’ve got to be ready to play from the drop of the puck.

Toffoli, on generating fewer scoring opportunities:
Our forecheck isn’t as good as it has been. We’re struggling to get the puck back when we’re dumping it in and that’s one of our strong points, usually.

Toffoli, on Kari Lehtonen:
He had a couple nice saves there. But throughout the whole game, he was seeing a lot of the shots we were taking. We didn’t do a very good job getting in front of him.