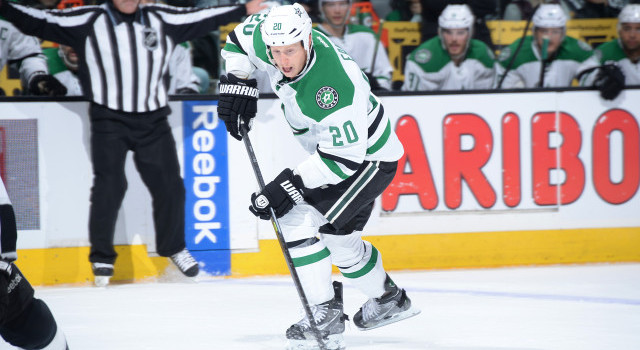 Jason Spezza, on the win:
I thought it was a great game by us with some big saves by the goaltender when we needed it. I thought the third period was a really good period for us. We’ve struggled with the lead a little bit this season, and that was a good step in the right direction for us to lock it down like that.

Spezza, on his reaction to Kari Lehtonen’s save on Jarret Stoll:
It’s a special save by him. It shows his athleticism. At the time of the game, with the way the flow of the game was going, it was a big save to maintain the lead for us and to keep us in the game and up and to be able to continue to play along with the way we’re playing.

Spezza, on the goal that was waved off after the puck hit the mesh:
The whistle didn’t go. So there is a little bit of grey area. We don’t know what’s reviewable and what’s not right now. There has been some overturned and not. Our opinion was that because play went on, it’s a live play. But they got it right. We would have like to have seen the goal though.

Kari Lehtonen, on his save on Jarret Stoll:
It’s one of those things that maybe one out of 50 times you’re able to get it. It sure felt good and I was happy about it. There is not much to do with goaltending when you’re just scrambling and he ends up hitting the glove. I have to be happy about that.

Lindy Ruff, on the game:
I thought it was a good win for our club. We knew we had them on a back-to-back. I thought we came out pretty good in the first period. They had a little push in the second. I thought we responded pretty well. We needed the one real big save from our goaltender. But other than that, I thought we played a pretty clean game defensively where we didn’t give up a lot of good opportunities.

Alex Goligoski, on holding a team under two goals for the first time this season:
I think we’ve been good at times and bad at times. It’s just a consistency thing and closing out games. It’s good to close them out.