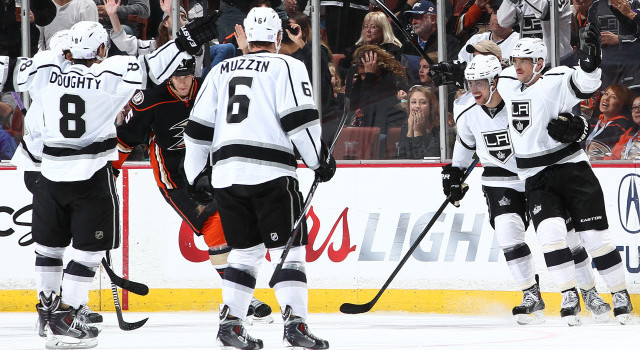 On the shootout loss:
It wasn’t a very good game by us. They did a really good job defensively in the neutral zone. They made us turn over a lot of pucks, and when they turned it over, they were getting it right back into our zone and getting on the forecheck, and that caused a lot of guys to have some long shifts, and when you’re out there for a long time, you’re obviously tired, and that’s when they got some good opportunities. I think that’s one of the main reasons why we lost.

On whether the two-goal leads felt “secure”:
I think our team always feels secure when we’ve got a two-goal lead. [Reporter: I mean, usually that’s a slam dunk.] We always feel good with the lead. Obviously we have Quickie back there. We have one of the best, I think, defense cores in the whole league, and all of our forwards play pretty good D as well. So whenever we have that two-goal lead we definitely feel secure, but tonight we weren’t able to do that, and we need to fix that because we’re going to be put in that situation a lot and we need to close games out.

On how he feels receiving one point against Anaheim:
You know, we were putting pucks in the net. I guess that’s one good thing. We usually don’t score five goals, so that’s a very good thing, I guess, but at the same time I think a lot of people were cheating out there. I don’t think we were playing responsible in our own zone. We were trying to get breakaways, trying to find odd-man rushes and trying to make pretty plays. Against a team like that who’s very good in the neutral zone you just can’t do that. Obviously without Quickie making some big saves, we probably wouldn’t have made it to overtime.

On why the team has been allowing more shots on goal this season:
I think a lot of their shots – maybe not tonight, but in other games – I think we’re doing a pretty good job of keeping them to the outside. Quickie’s feeling the puck, but if you’re letting them shoot from the outside, Quickie usually saves [it] every time. Tonight that wasn’t really the case. I thought he had to make some big saves, but we definitely need to clean that up. We can’t be letting that many shots against because if you let 45 shots against, there’s going to be a few getting past Quickie no matter how good he plays. We’ve got to fix that, big time.

On whether this game served as “Game 8” for last year’s playoff series:
I don’t know about that. The fans were great out there. Our fans were louder than theirs, there’s no doubt about that. That was a good feeling. That kind of made it feel like the playoff atmosphere. It’s a tough team to play against. They’re in our division. We’ve been battling with them for years, and we’re going to continue battling with them this year. I think all the games are going to kind of be played that way.

On facing Dallas tomorrow:
Dallas is a good team, too. They’re going to be a huge test for us. We beat them last time, so they’ll be hungry. Got to play well against them to beat them.