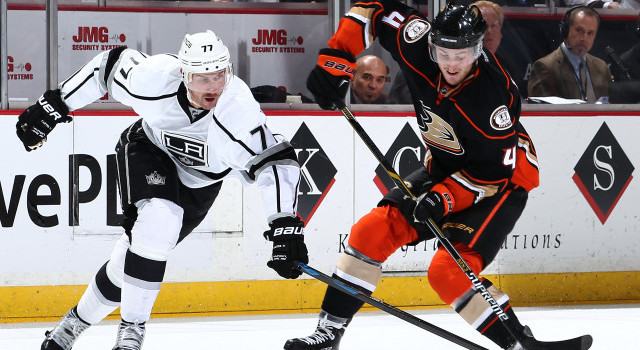 On how he’d describe the 6-5 shootout loss to Anaheim:
How’d I describe it? Lost in a shootout.

On how “intense” the game was:
It was very little, quite honest. It was just kind of a pond hockey game. It looked like one of our preseason games. [Reporter: Seriously?] Very seriously. You want me to say ‘not seriously?’ [Reporter: Are you talking about just from your team’s end, that you weren’t happy with letting this thing get away, or no?] No, I don’t think we let it ‘get away.’ We never really had the lead. [Reporter: A couple of two-goal leads?] I know you define it by goals having a lead, but we really never had the lead. If it wasn’t for Jonathan, it wasn’t even close. They’re a much better team that we are. They proved it last year and they did again tonight. [Reporter: So what was lacking, do you think tonight? For the most part?] I don’t think we had much energy, much focus, much execution. We used a short bench. Too bad actually we lost the shootout, because then Jonathan feels tough, right? He stood on his head to get us a point.

On how tonight’s game affects the Dallas game tomorrow:
It doesn’t affect much.

On what he says to the players after tonight’s game:
Aw, we’ve had such an awful three years. I don’t know how I can come up with anything to tell them after we lose a game.

On whether the shortened bench was related to the way players were playing:
Yes. It’s a big, physical team we were playing, so you’d have to be prepared to play like that.