Kings were familiar with McBain before signing him 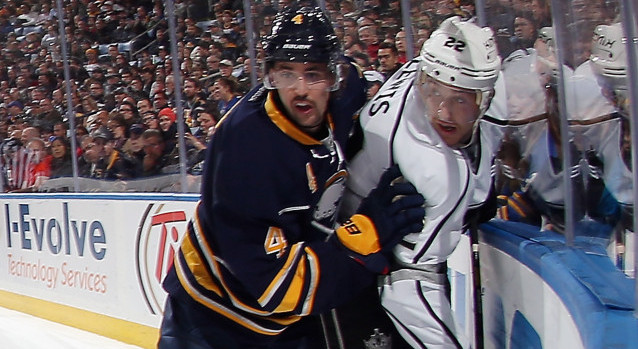 Jamie McBain, who will make his Los Angeles Kings debut after five games with AHL-Manchester, wasn’t yet able to say who he’ll be paired with for tonight’s clash with the Anaheim Ducks.

“Not exactly yet, but we’ll see tonight. We’ll go from there,” the 26-year-old defenseman said. “It doesn’t matter to me.”

Darryl Sutter underscored his game readiness earlier today by highlighting the quick learning session he had in Manchester.

The Kings’ hockey operations are fairly familiar with McBain. Chatting with LA Kings Insider on Monday, General Manager Dean Lombardi said that the Kings had kicked the tires on the young defenseman while considering a potential trade with Carolina several years ago. But McBain was ultimately traded to Buffalo shortly before free agency opened in 2013 and totaled six goals and 17 points in 69 games with the Sabres last season.

“We were in Buffalo when Quickie got hurt, and they had, I think five of their six [defensemen]…were under 25 years old,” Blake said.

“I remember showing Dean after, saying, ‘That’s a pretty young D-corps.’ And then he’s available this summer. We weren’t looking at all over the summer because we were pretty well set. It wasn’t until the Slava thing came, and [McBain’s] agent is Pat Brisson. Our kids kind of play together, and that’s how it started.”

McBain, signed to a PTO with Manchester while Los Angeles was on its recent road trip, debuted with the Monarchs on October 31. He scored as part of a four-shot effort in a win over St. John’s the following night and within two weeks had a number and a locker in the Kings’ room.

Things have moved quickly, but McBain has taken everything in stride.

“I guess it was nice to have two days of practice here,” he said. “That’s kind of rare almost in an NHL schedule, you get two full days of practice with a team. Especially coming in as a new guy, it was good to be around the guys and get a few practices in and get a few video sessions in with the coaches. So that made it a lot easier. But at the same time, I’m excited to go out there and play the game because once you step on the ice, you kind of let your actions speak for themselves and nothing else really matters.”

Defenseman Andrew Bodnarchuk could have been a target for a call-up after having spent two years in Los Angeles’ system, though the 26-year-old who would earn a league-minimum at the NHL level suffered a knee injury during training camp and is skating on his own with the Monarchs.

While the Kings didn’t have Bodnarchuk’s services, they moved to take a look at a player who has something that Bodnarchuk, who appeared in five games with Boston in 2009-10, doesn’t have as much of.

“I think the biggest thing is his NHL experience,” Blake said of McBain. “26 [years old], with close to 300 games, and if you watch him here in practice the last couple days, you can tell he’s played in the NHL before. I don’t know what has happened here the last year with Buffalo, he went through the summer where he didn’t end up getting a contract and things, but you know that he has that potential, and you hope that this is a good chance for him to show it. It’s in a structured organization, too, so this is a big difference.”

Also a noteworthy difference: McBain is now playing for a very good NHL club, not the Monarchs or an team that didn’t make the playoffs during his tenure.

“I was able to play a few games down in Manchester to make sure I got my game back and the timing back and being in real time,” McBain said. “But definitely in that first period, with this speed of the NHL level and especially playing the Ducks, a top team in the league, it’s going to be a great test for me. I just have to get that first pass, that first hit, something in that first shift to get going.”

McBain, on making his debut for Los Angeles tonight:
I’m very excited. Ever since, like I said, from day-one being here, being around the guys it’s been a great opportunity for me. It’s been a lot of fun to get to know them and kind of this atmosphere. I’m looking forward to getting back on the ice with them tonight.

McBain, on whether it was difficult to not be on an NHL team to start the season:
Yeah, it was definitely not fun. I was sitting back in Minnesota in October watching all the games start up and just sitting there waiting was not a good feeling. When I got that call to go to Manchester and get going again, it was a very exciting time. One thing led to another and now we’re here. I’m excited, like I said, to get back on the ice and get playing tonight.

McBain, on whether the thought enters the mind that he might not get an offer:
It does, but at the same time you keep working and you keep skating and keep training waiting for that right time to happen. It’s the game of hockey and injuries happen, things happen on the business side with things you can never expect or control. So there is always maybe something going on where the call can come any day. So, like I said, it’s just making sure that you’re training, working hard, and when that phone call does come you’re ready.

McBain, on getting acclimated quickly:
It’s a lot of information, but at the same time, it’s a lot of the same stuff that I think everyone kind of uses. There are a few small things here and there that you’ve got to get used to. But other than that, it’s still just the game of hockey and you just go out there and play. That’s what I’m looking forward to the most, just getting out there and getting out on the ice and letting that speak for itself.

McBain, on whether he attended and Minnesota Wild games while he was training:
No, I didn’t. I saw a few on TV, but no, I didn’t make it to any.