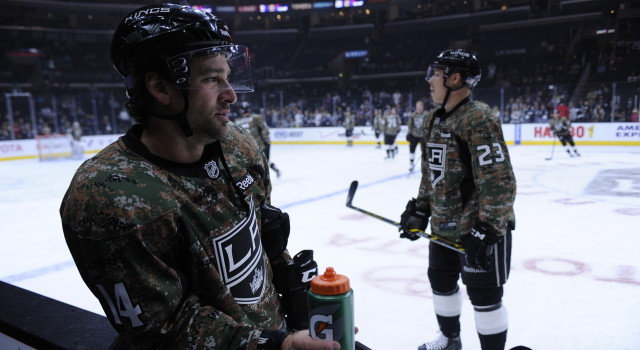 Good news, everyone: With six defensemen active and healthy for tonight’s game in Anaheim, the Kings will return to icing a complete, six-man defensive group for an early season Pacific Division rivalry game.

Sporting a record of 8-4-3, the Kings have done a remarkably good job of dealing with personnel issues that have impacted the consistency of the 20 players selected by Darryl Sutter to take the ice on any given night.

Of course, on one night, they weren’t able to ice 20 players due to an injury spike and the lack of flexibility as Slava Voynov’s contract continues to count against the salary cap. And on Saturday, they relied on an irregular 13 forwards / five defensemen balance after Robyn Regehr was felled by a practice ailment – not that you would have heard any issue raised from within the dressing room.

“It’s just a ‘ho-hum, oh well, this is what we’re dealing with today [mindset],” Williams said. “It is what it is. That’s the attitude we have. We’ll deal with whatever cards we’re dealt. If they stink, then we’ll play them.”

The Kings might as well be card sharks. Having bluffed their way to a pair of wins over St. Louis and Minnesota during their six-game, mid-October homestand, they’ve dealt with the roster adversity quite well and are on pace for just shy of 104 points (though, notably, they’ve played nine of their 15 games at home). Whether it can be described as the Park and Ride approach or anything similar, Sutter’s blinders have kept the team intently focusing on the task directly in front of them.

It’s a fortunate approach and one that has sustained them during Voynov’s indefinite suspension and recent injuries to Marian Gaborik, Anze Kopitar, Trevor Lewis and Williams himself. Regehr will miss his second consecutive game with an undisclosed injury tonight.

Given the team’s tendency to look forward rather than at events in the past, don’t expect any particularly wild juices to be flowing when they visit Anaheim for the first of five meetings between the teams this season.

“I mean, juices get revved up come playoff time,” Williams said. “We’re only a few games in, but still at the same time they’re important points.”

Justin Williams, on how the Kings handled their three days between games:
I think it’s good as opposed to the last couple years where the schedules have been pretty condense. We’ve had a few days in between some games to relax and get a regular feel of an NHL season as opposed to one playing every other day.

Williams, on the Pacific Division:
It’s a good division, we know that. It’s hard, that’s why getting first and getting home ice is all that more important.