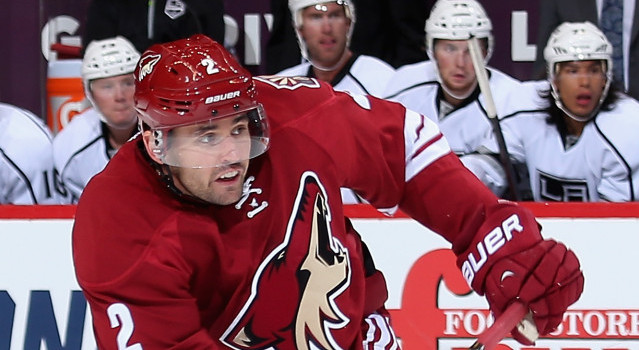 The Los Angeles Kings officially signed defenseman Jamie McBain to the league-minimum $550,000 salary on Wednesday and placed him on the active roster. He’ll be eligible to play Wednesday night against the Anaheim Ducks.

More on McBain joining the Kings can be found in yesterday’s post. The 26-year-old puck-mover has 92 points (25-67=92) in 275 career games with Carolina and Buffalo.

“He hasn’t played on a good team. Big difference,” Darryl Sutter said. “Good kid, good skill set. The next part is the game.”

“You know what? He’s had a really good college career, came out, and played a year in the American League,…got off to a good start in Carolina, signed a big contract, and had trouble getting one. It happens.”

The Kings cleared roster space for McBain by designating Slava Voynov as a non-roster player. Non-roster status, which must be approved by the Commissioner, can be applied to players “unavailable to play due to reasons other than injury, illness or disability.” Voynov’s salary will still count against the Kings’ cap as he continues to receive pay.

Prior to today’s transactions, the Kings had $564,290 of cap space, according to CapGeek.com.

The precedence for today’s roster moves are explained in the CBA.

(a) Upon approval of the Commissioner, a Player who is unavailable to play due to reasons other than injury, illness or disability (e.g.,
birth of a child, attending a funeral) will be designated a Non-Roster Player, and during such period of his designation as such he will not count against the Club’s Active Roster limit and his Club may replace such Player, provided, however, that the Non-Roster Player’s Player Salary and Bonuses and his replacement’s Player Salary and Bonuses are each included in calculating a Club’s Actual Club Salary and Averaged Club Salary, and the Players’ Share, for purposes of Article 50.

(c) The Commissioner may take whatever steps he deems necessary to investigate the circumstances under which a Player is placed, or remains, on the Non-Roster List. If the Commissioner has reason to believe that Non-Roster status has not been utilized properly by the involved Club, or that requests to designate a Player as Non-Roster are or were in any way improper, or if he determines that the Club has used the Non-Roster List to evade the Active Roster limit or otherwise Circumvent any provision of this Agreement, he may take such disciplinary action against the Club as he deems appropriate.