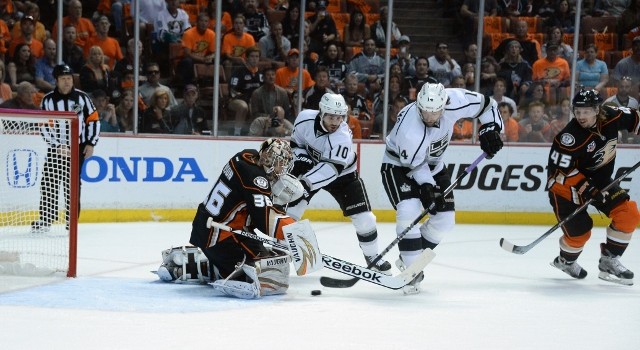 In the past there was a regional rift but no real genuine and developed distaste between the NHL’s two Southern California squads, a point Darryl Sutter once hammered home by saying, “I’m not into that rivalry stuff unless they’re two top teams that are battling for a spot.”

Well, the Kings and Ducks have established themselves as top teams, and that “spot” emerged as a berth in the 2014 Western Conference Final, a position secured by the Kings after a second round Game 7 win at Honda Center on May 16.

If the Kings-Ducks rivalry has evolved, this week’s games could serve as early indicators. Wednesday’s game in Anaheim – followed, after Dallas visits on Thursday, by a Staples Center Saturday matinee – will be the first regular season contest between a pair of teams that have padded their rivalry resumes.

“It’s not [Chicago] and it’s not San Jose or anything like that,” Drew Doughty said. “But yeah, we have a rivalry with them no doubt. When we go to their arena, we hear a bunch of our fans when we score. When they come here, you hear a bunch of their fans when they score. There is definitely a rivalry there. They’re a tough team to play against. I think our teams have been pretty even for four or five years now. We’ve been trading off who is winning which game and what not. There is a rivalry there, without a doubt. We were happy to beat them in playoffs last year. I’m sure they weren’t too happy that we did. So they’re looking for a little bit of revenge and we have to step up to the plate and beat them.”

Doughty underscored the noise generated by visiting fans when asked whether the Kings’ first regular season trip to a building in which they went 3-1 in the second round will bring back any special memories.

“It’s great to be in there for that reason,” Doughty said. “I feel like our team does play well there. Ever since I’ve been in the league, I feel we’ve probably been pretty even winning games there versus losing. We enjoy going there. It’s an easy drive. We get to skate at home. We get to sleep in our own beds the night before, that’s always a plus.”

Sutter emphasized the noise and in-arena allure that sticks out as part of the series’ highlights.

“All you have to do is go back to the rookie tournament, the last rookie camp last year, and you go into their building and there’s 10,000 people,” he said. “This year we played a rookie game in Phoenix and there were a hundred of your closest friends. It’s a big difference.”

Two primary actors in the Kings-Ducks rivalry may be sidelined tomorrow as Corey Perry and Francois Beauchemin are battling viral gland infections. Perry, who is currently on injured reserve, had received intravenous treatments at a hospital, per the Orange County Register’s Eric Stephens, who also noted that results on the two players are expected tomorrow.

Drew Doughty, on whether a rivalry game is more fun to play in:
They’re definitely more fun. A team like the Islanders comes in, or the Sabres or something like that, they’re a team that you never see. Sometimes you don’t even know any of the players on their team just because you never play against them. So rivalry games are so much more fun. You get up for the game, get excited before the game even begins. You get out there and hopefully beat that team. Getting familiarity with the guys on their team, you know how hard it is to play against some of their players. When you know how hard it’s going to be that night, you step up to the plate and you enjoy that challenge. I think that’s one of the best things.

Darryl Sutter, on the evolving rivalry:
I’m oblivious to it. Couldn’t care less. It’s about what it takes to win. If you think there’s a rivalry there, fine. The whole game part of it’s changed in terms of making playoffs and division and all that. It’s changed so much because of the way it’s reset now in terms of how many games you play, and how many games you play in their building. It’s changed so much. It changed starting last year, even, with the new divisions.