Praise for a young defense overcoming a challenge 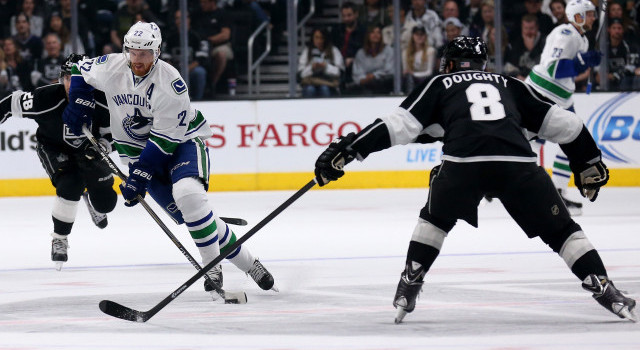 Alec Martinez and Jake Muzzin earned the first and third stars in Saturday’s 5-1 win over Vancouver, an impressive and clutch haul for a team that was forced to play a man short defensively due to a lack of cap space that kept the team from recalling a player after Robyn Regehr suffered an injury during Friday’s practice.

For Martinez, the career-high 25:30 of ice time bumped his season ice time average up to 19:48 – more than four minutes beyond his average from the previous season.

“I would say the defense were all like that. They all did that,” Darryl Sutter, referencing the absorption of Regehr’s minutes.

The Kings did themselves a huge favor by killing an early five-on-three and playing with a lead for 50:17 of the game.

Darryl Sutter, on winning a game with five defensemen:
When you have a lead, it’s much easier for your defense. It’s the first time ever that I’ve dressed five defensemen. I’ve been on a team that’s dressed only five defensemen, so to be able to come away with a win is unique. [Reporter: Emphatic, too.] Be thankful that we had the days between games, because clearly being short of manpower hurt us. It cost us points when you look at Pittsburgh, Philadelphia, those situations, on the back-to-back, Detroit. It clearly affected our game. The biggest difference in defense, quite honest, I remember winning a game where we dressed seven defensemen and 11 forwards but knowing full well that your seven and 11 were experienced at the situation. But it’s pretty general when you say five defensemen you’re talking about some pretty young players there. So I thought they played really well in the situation they were in. The minutes, it doesn’t sound like much, [but] it’s a lot to go from a low-teen to a high-teen or to go from a low-teen to a 20, or go from a 20 to a 25 is a lot, and if you’re doing that chasing the lead, that’s probably way too much. [Reporter: You were able to stay out of the box, too, after a couple early-] Well, you can’t stay out of the box. I mean, you’re not going to go ‘zero.’ That’s your goal, is to go zero, but it’s not going to happen. [Reporter: That five-on-three was huge, killing that off.] It’s the difference in the game. And the difference in the game is also after that, is your top players score. They’re supposed to do that. Let’s not get away from that. There are guys that are supposed to score. That’s what their job is.