The View from Vancouver 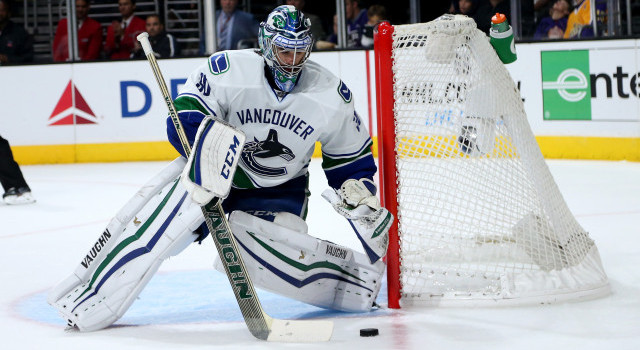 “Ryan Miller shaking his head in disgust over any goal is never good. And the Los Angeles Kings vowing to channel their inner April championship form instead of their mediocre November is never good for the opposition.”

“Three games in four nights and four in six will test the resolve of any club. Injuries don’t help and Miller didn’t have his best night with a couple of on-his-knees goals that beat him high.”

Jason Botchford: The Provies: The Canucks get the woodshed treatment and we still blame the refs.

“There were no moral victories tonight. No push back either. Dorsett was hurt during the game. Kassian didn’t play. So if you were hoping for some body count to make the loss sting a little less, you weren’t getting it.”

“As it turned out, Miller would have needed a shutout for his team to get a regulation win. The Canucks, who lost all three games here last season, have scored only four goals in their last 16 periods in Los Angeles.”

“To some degree, they’re returning to SoCal conquering heroes, regulars on a Canuck team whose turnaround under Benning and coach Willie Desjardins after last season’s disaster was one of the biggest stories of the NHL’s first month.”

PASS IT TO BULIS

“About the only line that seemed to be clicking was the Bo Horvat line, with Shawn Matthias and Brad Richardson on the wings. The line was used mainly in a defensive role — they didn’t start a single shift in the offensive zone — and faced a steady diet of the Kings’ biggest offensive threats.”

“When the Canucks were down 3-0 and should have had a bit more pushback, they went +8/-22 for a 26.7% Corsi in the frame at even strength, which was quite representative of how soundly the Kings were able to control them.”