On five D, Regehr being “day-to-day” and Williams 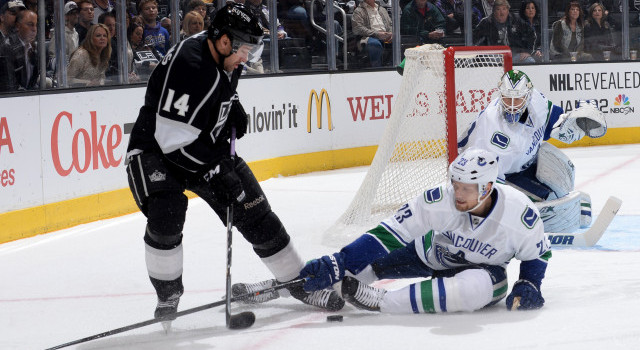 Regarding Robyn Regehr, who left Friday’s practice early and was deemed “questionable” for tonight’s game, Darryl Sutter declined to specify on the location of the injury but noted that the veteran Kings defenseman is “day-to-day.”

“If Robyn can’t go, then we go with five D. It’s fairly well documented,” he said.

While Matt Greene couldn’t recall a time a team of his opened the game with five defensemen, he referenced a particularly important Kings win in which the team played shorthanded defensively for roughly 60 minutes.

“I think the last time we had big minutes like this was Game 1 against Anaheim in the playoffs,” Greene said, acknowledging the team’s 3-2 overtime win. “I think Reg got banged up pretty quick and then a lot of guys played a lot of minutes. But it happens. You just have to go through what we can play here and that’s it.”

While Drew Doughty appears to be a target for another heavy workload should Regehr miss tonight’s game – “We haven’t seen him where he runs out of steam, Greene said – it’s also the versatile Alec Martinez who should see an uptick in his usage against the Canucks.

“My preparation stays the same. I can play both left and right,” Martinez said. “I was doing that a bit in the preseason, too, going back-and-forth, shift-by-shift. You’ve got to be able to play a game on both sides.”

Still, Doughty has cracked the 30 minute plateau three times in the last five games and ranks second in the league with a 28:10 time on ice average. He was excellent in logging a season-high 31:46 during Tuesday’s win in Dallas and followed that up with nearly 30 and a half minutes in a shootout loss against the New York Islanders on Thursday.

“Well, he’s played a lot already with the situation that we have here,” Sutter said. “Is it ideal? No.”

Darryl Sutter wouldn’t confirm that Justin Williams would re-enter the lineup. The reigning Conn Smythe Trophy winner missed Thursday’s game with a cut on his eyelid sustained on a high stick by Stars forward Brenden Dillon on Tuesday. Williams said that he’d “hopefully” be in for Saturday’s game when speaking with reporters yesterday based on conversations he planned on having with Sutter.

“You know, obviously, again, going back to the way our injuries are, we’ll put everybody in the lineup and decide then,” Sutter said. “It’s no ‘cut-and-dry.’ Literally, it is ‘game-time.’”

Matt Greene, on preparing for a game in which the team may use five defensemen:
Same way. I think all of us have played together before. I think Marty gets affected the most. He’s got to jump back and forth sides, but he’s done it before and he can do it again. Just be ready to play more in certain situations and be ready to go.

Greene, on whether the Kings’ early season has been mentally challenging:
Not really. I think you ask anybody these forwards when we’re only dressing 11, I think they enjoy it. If you can play a little bit more, you always kind of embrace that challenge. You’ve just got to play with the hand you’re dealt and this is what it is for tonight, and just go with it.

Greene, on Drew Doughty welcoming extra minutes:
Dewey plays a lot of minutes and it doesn’t really seem to affect him. You haven’t seen him run out of steam. So he’ll be getting a lot of minutes tonight and it’ll be fun to watch.