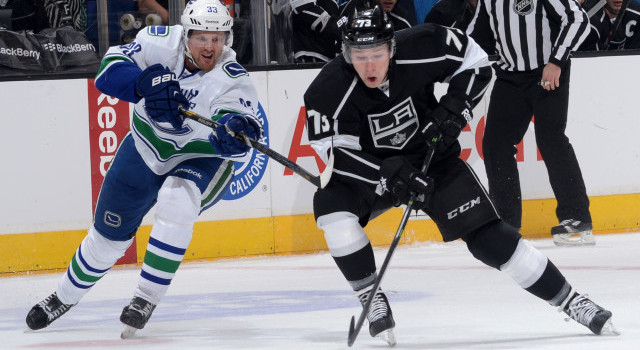 Darryl Sutter, on whether Vancouver’s start is a “surprise after last year:
No, I think they had an off-year last year. I think that they got thrown under the bus for it. Obviously there’s a management change and a coaching change. I think Willie will have – I’m not saying it because we’re in the same fraternity – but he’ll have a big impact on the composure of the locker room, for sure. I’m sure you guys are seeing that. And obviously solidifying the Luongo situation was not fair to anybody when you look at it, so solidifying that is huge. I think – doesn’t Miller, coming into today have 10 wins, I believe? So it’s significant.

Sutter, on his relationship with Vancouver coach Willie Desjardins:
My brother Brian played with him, and I played with him. Obviously we played in the Western league a little bit, and we were obviously separated once he took a different route. We played in Japan a year apart. He went, and then I went. And then he went more the Canadian college route in the coaching part of it, and then I went the other way. And then now, back into coaching at this level. [Reporter: Are his teams a reflection of him? He was a pretty gritty little centerman if I remember at the U of S when he played.] I don’t know. I mean, I’m sure that the reflection that he would bring to his room – what all good coaches do – is honesty and trust. Not everybody does that.

Sutter, on his expectations of Tanner Pearson and Tyler Toffoli entering the year:
Clearly, trying to give our team some more offensive opportunity. I think that Tyler probably had more opportunity last year because he played more. We were allowed to get him in more. And then Tanner, during the playoffs, showed that a little bit more. So when you look at the positions they play for us, we need more from those positions, and they’re 22 years old. It’s good to be able to put those kids in situations.

Daniel Sedin, on Los Angeles playing a defenseman short:
We just have to get pucks deep and make them play a 200-foot game. I think that’s going to be huge for us tonight.

Sedin, on Los Angeles’ physical play:
That’s fine. I think we like it when guys come at us. It opens up room behind them. We’ll see what happens tonight. I think for us, it’s about how we play as a team, roll four lines and we’ll probably have a few new guys coming in tonight. We’re going to play the same way, that’s key for us.

Sedin, on the Pearson-Carter-Toffoli line:
That’s when you need to win faceoffs and hold on to pucks down low. You can’t give it up easy. It’s so hard to backcheck in this league each and every shift. You’ve got to hold onto pucks and try to get those shifts in their end instead of your end.

Kevin Bieksa, on the importance of playing a strong, physical game:
A strong, physical game, is that what it’s going to be? It’s a team that’s a good team obviously, a couple Stanley Cups and we’ve had a little bit of a rivalry with. One of the so called big three in California, we know we’re going to have to have a good record against them this year to go where we want to go. It’s the first of several, so it’s important to get off on the right foot.

Bieksa, on countering Los Angeles’ physical approach to the Sedins:
I don’t think that changes a whole lot for us. I think the Sedins are used to teams going at them. They’ve had a lot of success with teams rushing at them. But LA is a good team. They’re a good defensive team and I don’t think it’s just their defensemen. I think their forwards are very good and responsible. Kopitar is obviously a very good two-way player and Brown and those guys. The twins will do their thing out there. They’ll work hard. They probably won’t allow as much space as some of the Eastern League teams, but they will have to battle through just like we will. We’ll have to be good on their top guys.

Bieksa, on facing the Pearson-Carter-Toffoli line:
They’re a good young line and I think they have a lot of speed. We haven’t seen them together, I don’t think, yet. I think that was kind of at the end of last year and the playoffs and then early this year. You look at their numbers, they’re doing well. They’re scoring goals, they’re kind of leading their team right now. They’ve got a couple good lines we’re going to have to be good against.