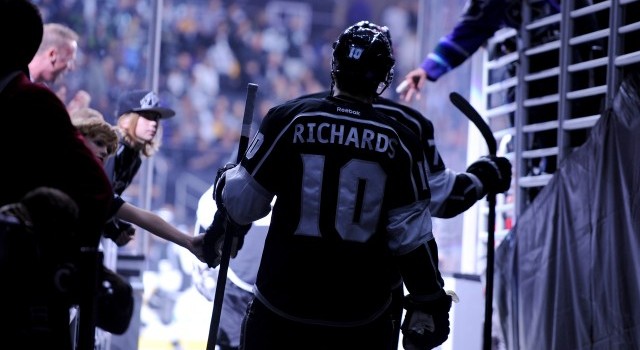 Mike Richards, who drew scrutiny during the preseason for how he would respond to a 2013-14 regular season in which his production dipped, may have raised an eyebrow over the first eight games in which he recorded two assists and a minus-one rating.

But Richards has strung together an encouraging collection of games, having recorded points in five out of six. He’ll carry a four-game point streak into tonight’s contest against the Vancouver Canucks.

“I feel better now. I feel better,” Richards said. “It’s a little bit of luck. I’m getting some chances, getting some bounces here and there. But I’m feeling good on the ice, so I think that’s the most important thing.”

Speaking of luck, Richards was particularly unlucky a season ago. His 7.0 shooting percentage was the lowest since his rookie year, which pushed his goal total (11) below what it was in the lockout-shortened season (12). Over a tiny sample size this season, Richards’ two goals on 18 shots (11.1%) represents a shooting percentage in line with his career average (11.0%).

“He’s been able to string some games together where he’s getting points. It’s good for his confidence, good in the way he feels about it,” Darryl Sutter said. “We’re trying to get production from everybody, and I think Stolly and Mike, whoever we’ve put with them this year so far have been able to produce a little. We’re trying to get everybody to do that.”

This isn’t to say that Richards’ production levels are going to explode to what they were when he was a member of the offensively gifted Flyers, but rather that his returns over the last two weeks represent a good trend. His assist on Thursday – he wristed the puck toward the goalmouth, where it deflected off Dwight King and in – is the type of pucks-and-bodies-to-the-net-type of greasy goal that he can be counted on generating.

“During the home stand, we might have got spoiled a bit with some of the goals that we were scoring,” he said. “Carts’ line was doing highlight reel goals, Toff, every night. We just have to get back to what we do and there are different players that do different things. Know the situation you’re in and know the role and know what is going to give you success.”

With Justin Williams missing Thursday’s game due to injury, Richards has become the club’s Iron Man. The durable center has appeared in 193 consecutive regular season games since returning from a December, 2011 concussion suffered on a high hit from Florida’s Sean Bergenheim.

“So now I’m going to get hurt,” joked Richards, who said that he isn’t superstitious. “Obviously nobody wants to be hurt. I don’t know what it is. I don’t know. You just play, to be honest. It is what it is. You’d love to play in every game to be honest. I missed a lot early in my career, so it’s nice to kind of make up for that now.”

“Mike doesn’t get enough credit for how durable he’s been for our team and what he’s done. My first game here, he was banged up and he came back right away and played. You look even at the conference finals two years ago, where…literally, we had to tell him he wasn’t playing…There were players telling me after warm-ups, coming after warm-ups and telling him not to play. You tell him not to play.”

Darryl Sutter, on players trying to tough out injuries:
Guys who play a long time, it doesn’t matter. That’s the way it works. Everybody talks about it when somebody is hurt, but it’s the biggest factor of winning and losing in today’s game, is the injury, what guys play with or what they can’t play with. It affects so much. You can have all these goals and all that sort of thing, but one thing you have no control over is that. So to know that – touch wood – that somebody like Mike comes every day, you know he’s going to play or that he wants to play. It makes it easier.

Mike Richards, on whether conditioning improves for players as they age:
Well maybe I had all the surgeries to fix all the other problems that could’ve happened. I guess the doctors did good work. It’s a little bit of everything. It’s monitoring your rest and taking care of yourself if you feel something tight or not right. You kind of get it looked at and taken care of. It’s just I guess a house cleaning sort of thing where you just maintenance every day. If something is bothering you, you get it looked at and you get it taken care of.