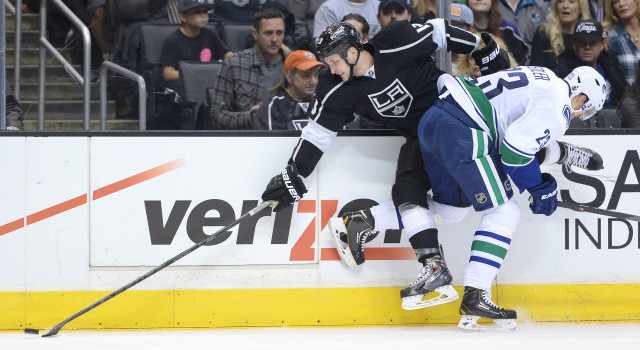 Darryl Sutter, on the Vancouver Canucks:
I think they really solidified their goaltending with everything that went on with Luongo there, and then bringing Miller in. They have a really good tandem in Miller and Lack. The twins are back on their game. They had a rough year last year. [Reporter: What about what Willie’s doing there with the team?] I know Willie. We played together. [Reporter: What’s he like? I hear he’s a really kind of calm, kind-kind of presence.] That would be right. [Reporter: What do you think his influence would be on a team after having to through changes at the top and that kind of stuff?] I think he’ll bring some composure, for sure to their team. [Reporter: How long did you play with Willie?] I was 19, he was 20, I think. Something like three decades ago, or four decades ago. He was probably a lot of the same kind of player that he is a coach. Thought the game really well, managed everything pretty well. [Reporter: How would you describe his approach to the game? I mean, is he focused on playing a two-way game? Has he changed the offense somehow?] Well, if you want to have success at the National Hockey League, you better be focused on playing a two-way game. If you want to be exciting, well, you’re probably going to be done in the first week of April. So I think he’s got a pretty good handle on that.

Sutter, on Jake Muzzin:
I think his game is progressing. I think he’s pushed his pace up. He’s playing games now. I know it was hard for him. Even though he was skating with us, he couldn’t have any sort of contact, so basically all he did was skate, and he wasn’t shooting and basically doing anything that was game-related other than to keep your conditioning up. But the only way you get your conditioning past a certain level is to get contact. The hardest thing is to – just think about it. It’s like getting knocked off your bike and getting back on again. It’s a lot easier just to ride it. [Reporter: You must’ve seen me bike ride.] I fall off more than I ride.