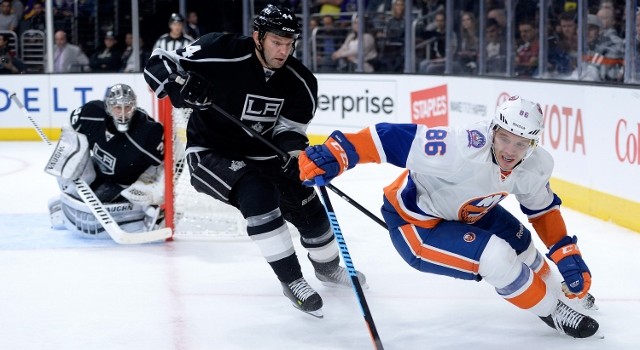 The Los Angeles Kings will not have enough cap space to recall a defenseman from AHL-Manchester should one be needed in place of Robyn Regehr, who left practice earlier today with an undisclosed injury.

“The old term about being a day late and a dollar short is almost accurate to the penny,” Solomon said.

Should Regehr not be able to play, the Kings would almost certainly utilize a roster that included five defensemen and 13 forwards instead of the standard six and 12. Using 11 forwards and six defensemen on October 28, the Kings fell 3-2 in overtime to the Philadelphia Flyers. Outside of Regehr, available defensemen include Drew Doughty, Jake Muzzin, Alec Martinez, Matt Greene and Brayden McNabb.

The Kings do not qualify for an emergency recall, as their previous game was played with the maximum 20 allowable players. Via Article 50.10 of the CBA, an emergency recall provides the ability for a team that dressed fewer than 20 players in any game to call up a player from the minor leagues who carries a cap hit of at most the minimum NHL salary plus $100,000 ($650,000) for the following game.

That’s not to say that Regehr will be unable to play tomorrow; at this point his status is unclear. The veteran defenseman was not made available to reporters before he left the team’s facility today.

“We don’t really think about it that much,” Sutter said earlier today of the team’s approach to the roster complications. “A lot of teams play four [defensemen]. It has no bearing on anything…who’s in and who’s not in. That’s it. I don’t get too caught up in any of that stuff. We just went through that a week ago. You get the same answer. We’ve been through it.”

This current complication is induced by the team’s roster purgatory in the wake of Slava Voynov’s indefinite suspension following his arrest on suspicion of domestic violence. Voynov’s $4.167M cap hit remains on the team’s books at a time it has dealt with injuries to Anze Kopitar, Marian Gaborik, Trevor Lewis, and Regehr. At this point, no resolution on Voynov’s status is expected in any immediate term.

While Solomon and the team’s hockey operations chart out a myriad of roster scenarios that could provide salary cap and roster complications, the team’s current situation is wholly unprecedented.

“I don’t know anyone who would possibly foresee being in limbo for this long, but that’s the situation we’re in, and we’re going to get by it.”

Drew Doughty, who enjoys heavy workloads, may want to get a good sleep tonight.