Williams out tonight, per Sutter 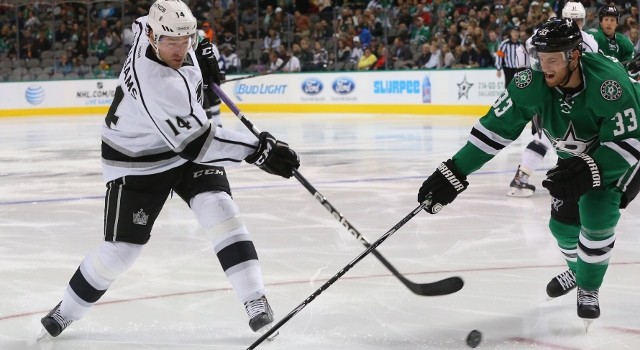 Darryl Sutter confirmed that Justin Williams is “definitely out” for tonight’s game against the New York Islanders.

Though Dustin Brown would be the most likely choice to replace Williams alongside Marian Gaborik and Anze Kopitar – Brown played most of the final two playoff rounds last spring alongside the two – it was Jordan Nolan who skated as the right wing on the Kopitar line during today’s skate.

That doesn’t necessarily mean that Nolan will play the full game alongside the two today, nor is it particularly important, as lines are fluid and frequently change in-game.

Williams was struck by Brenden Dillon’s errant high stick during a 3-1 Los Angeles win in Dallas on Tuesday. While speaking with reporters yesterday, Williams admitted that his vision was still blurry and that he’d “probably” be out of the lineup against the Islanders.

Unless Williams makes a remarkable recovery, his team-leading 225-game consecutive games played streak will come to an end. Mike Richards, who has appeared in 192 consecutive regular season games since December 22, 2011, would own the team’s longest active streak.

"It's still a little blurry up there, but I'll be fine." pic.twitter.com/yUgvF4IAet

Sutter, on how he’d like to “attack” the Islanders tonight:
We’ve got our hands full. It’s not so much ‘attack,’ it’s making sure we manage the puck properly against especially their top two lines and the coverage on their defensemen. I think they have, I believe, eight goals from their back end, which is a significant number.