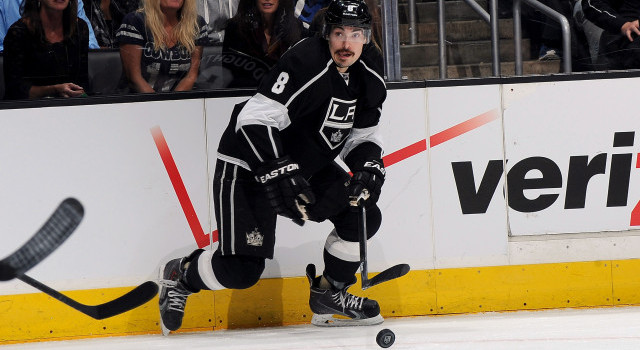 On the shootout loss:
We played OK in the first, obviously, and then the second wasn’t great. The third was pretty even but we gave up too many chances against, and we’ve got to bury on our scoring opportunities, too.

On wanting to establish Staples Center as a difficult place to play:
I still don’t think that we completely gave it away. I don’t think that by any means did they dominate the game or anything like that. I think we outshot ‘em. Our special teams – our power play needs to be better. We need to capitalize that way. Our penalty kill was pretty good. It was kind of a lucky goal for them there, but we’ve got to be better. We want to be a good team at home, and tonight we weren’t.

On facing a team playing the second night of a back-to-back:
Yeah, we would’ve obviously liked to come out in the first period and put in three or four goals, but it’s not that easy to do. Even though you’re playing back-to-back games, a lot of times that second game, you play better. I don’t know why that is, but just from experience, sometimes that happens. Maybe we took it for granted that they did play last night, and we didn’t come out hard enough.

On taking another step forward with Jake Muzzin:
Yeah, I thought we played really well tonight again. I had a penalty in the third period and a turnover, but besides that, I thought Muzz played great. I thought as a pair we did well. We didn’t give that Tavares line much, and that’s what our job was tonight, and we did a good job.

On whether playing 48 hours after a long road trip affected the club:
No, I don’t think so. We were prepared. We got a day off yesterday, didn’t have to go on the ice. All we had was a morning skate today. We were fully prepared for this game. We have no excuses. We should’ve won the game. We should’ve come out better. We didn’t, so we’ve got to look forward to Saturday’s game. We play I think Anaheim or Vancouver or something like that. So a conference game, and we’ve got to win. [Reporter: Vancouver.] There you go.