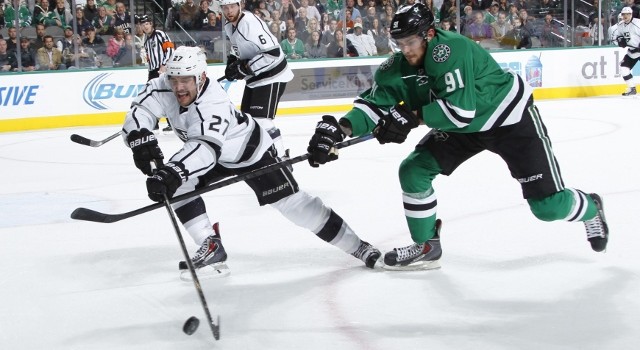 Though shy of the nearly 32 minutes Drew Doughty put in, Alec Martinez contributed a clean 19:52 of ice time during Tuesday’s 3-1 win in Dallas, the seventh consecutive game he played his off-side as a left-shooter playing to the right of Robyn Regehr.

Martinez isn’t unfamiliar with the right side – he saw the plurality of his ice time to Willie Mitchell’s right a season ago – but there has been an adjustment as he has moved from a role in which he earned “teen-minutes,” per Darryl Sutter, to someone who has inherited a healthy portion of the ice time and additional responsibilities in the absence of Slava Voynov, who has been suspended indefinitely by the National Hockey League.

“I don’t think really anything changes for me,” Martinez said. “Things are going to happen throughout the year. You lose guys for certain reasons. Everyone just has to step up and for me it’s been some added minutes and playing on a different side with Reg. For me, my mindset doesn’t really change.”

Martinez’s four blocked shots last night were a game high, while his five hits tied for the second most amongst all skaters in the win. But while his role has grown, there’s still an asset of his that allowed him to make a key one-on-one defensive play on a streaking Ryan Garbutt during a tied game midway through the second period.

“They’ve got a lot of guys that move their feet and a lot offensive guys, so you’ve got to be cognizant of that,” Martinez said of Dallas. “That’s part of their style of play, they like to fly guys a little bit. As a D-man, you’ve got to just worry about keeping five guys in front of you. I know I can catch up to pretty much anyone there.”

“You have to be cognizant of it, but I have confidence in my feet. I don’t think there are very many guys who can beat me at that.”

Garbutt has some wheels, though Martinez deftly caught up with him and nipped a scoring opportunity in the bud by denying a shot attempt on a play that had begun as a contested break.

Have expectations changed with Martinez over the two seasons he has seen time on the right side of the ice?

“No, I think…that was a big reason that we were a playoff team last year when we moved him,” Sutter said. “We didn’t have anybody that we could move to the right side. We needed a third guy, and we lost Keaton on waivers. The only two guys were Drew and Slava. I told Marty ‘You’re going to play the right side,’ and that’s when he was sort of in and out of the lineup, and he just went to the right side and away he went. It was hard for him, a big adjustment, and we still talk to him and reinforce different spots on the ice where it’s a switch for a guy. You see a lot of plays differently, especially defending, or when your partner gives you the puck. It’s a whole different angle. Did I expect any more of him? No. But the bottom line is Drew and him on the right side, they’re going to pack up all their minutes in there. [We’re] thankful that we have a player like that who can do that because you can go between Robyn and Greener and not miss a beat, and that gives those guys that speed complement, too.”

As Martinez articulated, it’s really only his alignment that has changed – not his overall game.

“I think I know what I’m good at and what my game is,” he said. “If I tried to be something other than that, I think I’d probably get myself in trouble. In terms of physicality, it’s no secret that everyone has to be physical on our team, the way that we play and Darryl harps on that. He talks about shooters and checkers. It doesn’t matter what role you have on the team, you’re going to have to be both at some point either during a stretch during a year or during a particular play during one game. For me, like I said, my mindset really hasn’t changed.”

Alec Martinez, on the win in Dallas:
I think it was just a good road win. We just had to grind it out. Like I said before, Dallas is a really good hockey club. They were already one of the clubs that were pretty good last year and they got a lot better with the guys they picked up. It’s just playing our game and sticking with it and playing 60 minutes of it and just grinding out a road win. We definitely needed that.

Martinez, on a reference that the team played better on the road than at home:
I agree, I think there were a few games we had on that home stand that Quickie really bailed us out. There are a few games there where we weren’t really satisfied with the way we were playing. Sometimes Darryl talks about output being more important than outcome. Obviously we were getting the outcome there, but I don’t think that we were too happy with the output. We had stretches on that road trip that we played some good hockey but we obviously were getting in penalty trouble and digging ourselves a hole in the beginning isn’t very suitable, especially on the road, for wins. But I felt that we had some good stretches in there.