Doughty and the evolving, versatile minutes-eaters 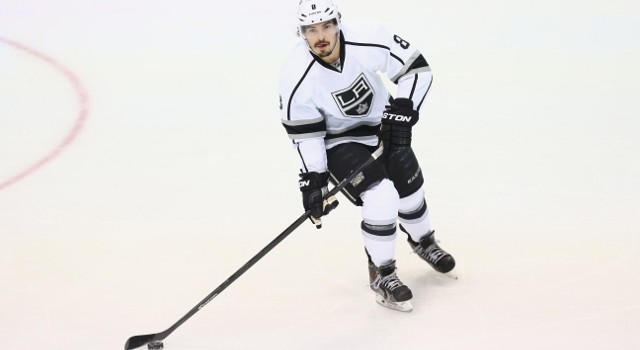 Drew Doughty logged 31:46 of ice time in last night’s 3-1 win over the Dallas Stars, his highest regular season time on ice haul since recording 33:25 in an overtime loss at Edmonton in January, 2013. Though he totaled a team-high six shot attempts, it was his play in all corners of the ice that drew praise for the second consecutive day.

If you’ve followed Doughty’s comments following nights of heavy usage, you know that he loves the extra minute or two.

“I felt good,” Doughty told me on FOX Sports West after last night’s game. “I thought I played really well tonight. Besides one of those shifts where they got a goal on us, I thought me and Muzz as a pair, we were great. Those minutes, I’ll play as much as they need me to. I just played well defensively, and that’s what I need to do in order to beat teams. “

At practice today, Darryl Sutter spoke about Doughty’s usage, and the challenges he faces as an anchor of a defensive unit that will continue to rely heavily on him for as long as fellow righthanded defenseman Slava Voynov remains suspended indefinitely.

“He’s had to and has to continue to find ways…to manage that time,” Sutter said. “I thought he had a really strong game last night, and you could see it. It’s not easy for him. This is a whole different deal here now with the way guys are used. It affects us. Drew’s a guy that’s going to thrive in that role, whereas some guys maybe don’t want to as much. And Drew does.”

The conversation with Sutter evolved into a discussion of how teams are in search of versatile, minutes-eating defenseman who are able to play in all zones – players such as Marc-Edouard Vlasic, Ryan McDonagh and Alex Pietrangelo, to name several of the elite defenders at the high end of the spectrum.

Darryl Sutter, on whether he had ever coached a player like Drew Doughty:
No, we’ve done that. You know what? That was the first thing when I came here, everybody asked about that comparison. Now it’s the other way around. Now guys are compared to Drew. It’s not the other way around. The game’s changed a lot. I’ve been fortunate to be around a lot of great defensemen, but none of them are the same as Drew. And those guys were Hall of Fame guys, too. Drew at his age has accomplished a lot already, and he’s just beginning to [do] what he wants to accomplish. [Reporter: He’s the new standard.] Well, there are lots of young defensemen like that in the game. Very comparable players. If you look at all those guys who play both ends of the ice – Drew’s killing penalties now, he plays against top guys – that’s how you play minutes. It’s easy to say ‘Well, we’re going to play a guy lots of minutes, but the reason that you’re three or four [extra] minutes is because he has to. So in comparing him to other players, all the best defenses in the league now have one-to-three of those types of defenders. All of ‘em, if you look at it. It used to be they were sort of the odd team to have [them] because they were special players, but now every team you play has got ‘em. That’s why they’re so hard to find, and when you lose guys or have injuries, it’s…the position now, it demands the most and it’s tough to develop that player in the NHL. You can play a guy a few minutes and sort of go like that, but until they’re ready to be 20-minute players, it affects your team.