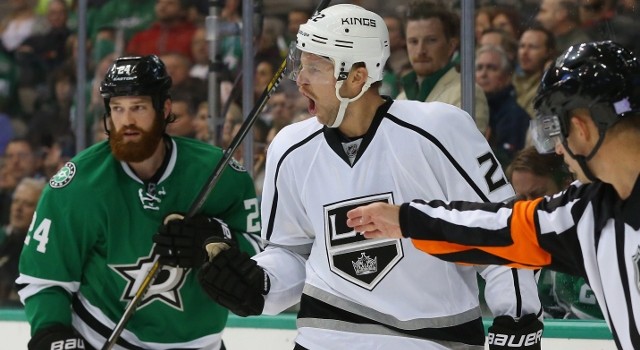 Drew Doughty, on Trevor Lewis:
Actually, I thought Lewie was one of our best players tonight. He did a great job on that other goal that Cliffy got. We need to capitalize on those turnovers. That’s what we look for, is to make turnovers and get pucks to the net quick.

Doughty, on players outside of Jeff Carter’s line providing offense:
The 70’s line is putting pucks to the net, obviously. There’s no secret to that, but that doesn’t mean that the other guys aren’t working hard and aren’t playing well defensively. I think all of our other lines have been playing well defensively, and we need obviously more production offensively from them, but that’s going to come. A lot of guys still don’t have their goals, including myself, and right now we’re just playing hard defense, and the goals will come.

Doughty, on Trevor Lewis being “sharp” since his return:
I expect that out of him. He’s a good two-way player. He takes a lot of pride in playing well both ways and he’s very deserving. I know last year was hard for him when he didn’t score for so long, and for him to get off to a hot start like this, he’s just going to become better and better as the year goes on and gain more confidence that way.

Doughty, on what he liked about the penalty kill:
We did a really good job. We were blocking shots, Quickie made the save when we needed it. We weren’t letting them get set up a lot. We had a very good neutral zone forecheck going, and when they did get pucks in behind us, we were very good at clearing the puck 200 feet. So [I’m] very happy with the PK, but the PK really needed to show up tonight and put on a good performance, and they did.

Trevor Lewis, on his shorthanded goal:
We just tried to get up ice there and force the goalie to make a play, and Stolly did a good job getting a stick on it and keeping it alive, and I just kind of poked it and he kind of went for a poke check and kind of slid it around him, so it was a big goal for us.

Lewis, on whether he feels good with where his game is at after an absence:
Yeah. Missing that many games, the first game I felt a little rushed, and the last couple of games I felt a little more confident with the puck and [was] trying to hold onto it a little longer and make some plays. Playing with Stolly and Cliffy, I mean there’s not a lot of thinking out there. We all want to get on the forecheck and turn pucks over. So it was good, and hopefully we can keep going.

Lewis, on confidence:
I think it clicks with everyone. I think it helps your game, helps you make plays, and when you’re confident with the puck you have a little more time than you think. I’ve just got to keep it up and hopefully keep going.

Lewis, on limiting a strong offensive club to one goal:
I think we got back to the details of playing Kings hockey and not giving them too many Grade-A chances. They’re a really good rush team, and for a little bit there, we had a couple odd-man rushes. Once we got that cleaned up and got pucks deep and started to get turnovers, I think it really helped us.