The view from Detroit 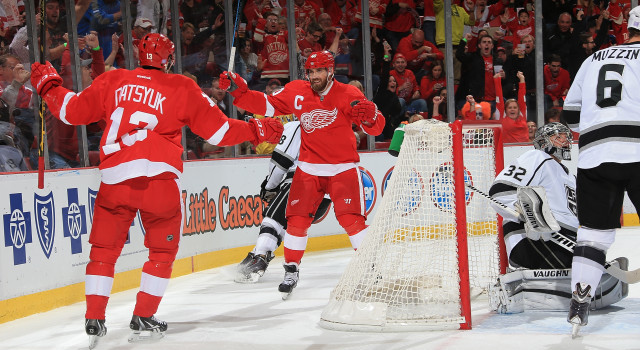 “The Wings jumped out to a 4-0 first-period lead on Friday night at Joe Louis Arena and went on to beat the Los Angeles Kings, 5-2.”

“Nestrasil has been on the third line, of late with Darren Helm and Tomas Jurco, but also has gotten minutes on the power play on the strength of being very good at protecting the puck.”

“The Kings chipped away, and had an opportunity to get within a goal when Dustin Brown had a penalty shot just less than three minutes into the third period.

But Jimmy Howard made the stop on his one-time youth hockey teammate in upstate New York, keeping the score 4-2.”

“But the Detroit Red Wings goaltender found himself in a key situation in the third period, facing Dustin Brown on a penalty shot as the Los Angeles Kings were mounting a comeback, having gotten a shorthanded goal from Tyler Toffoli just 41 seconds earlier.”

“To kids of that era, Howe was a combination of hero, cool uncle, prince of the city, Superman in DC comics and the guy next door. Few superstars (they didn’t even use the word then) were ever so humble.”

SB Nation – WINGING IT IN MOTOWN

“East Lansing experienced its first snow of the season today, and maybe that’s a sign of things to come. Winter is a-brewin’, and its going to carry the Wings with it, all the way into late-Spring. And, if we are lucky, it might even carry the Wings into the wee days of summer.”