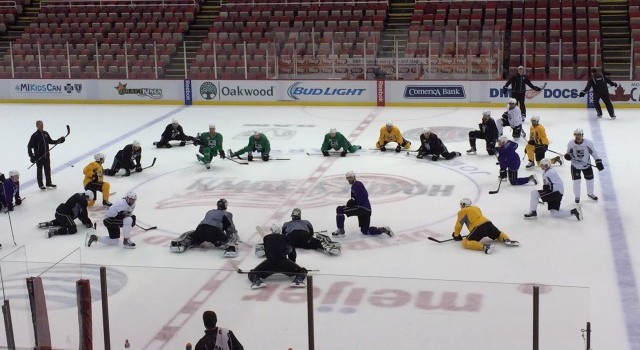 -As it stands, Anze Kopitar appears poised to return to the lineup tomorrow in Raleigh.

“I’m planning on [playing], unless there’s something really drastic that happens, but I don’t think I’m going to be doing anything this afternoon,” he said. “Hopefully it stays that way, and hopefully I feel like that tomorrow.”

-Justin Williams said that his shoulder “felt fine today in practice” after he took an awkward tumble into the boards during Friday’s 5-2 loss in Detroit.

“It was pretty self-inflicted, I think,” he said. “I went into the boards weird, and when you’re on the ground there for a few seconds, you’re just making sure everything’s in the right place. You’re making sure the shoulder’s all right. Everything felt all right, so I got up and went to the bench, and that was a little sore, but I might have dodged a bullet.”

When he returned to the bench, he received some immediate attention from athletic trainer Chris Kingsley.

“He was just making sure everything was where it needed to be,” Williams said.

Williams, who won the 2005-06 Stanley Cup with Carolina, will make his fourth visit to Raleigh since joining Los Angeles in the March, 2009 trade that also involved the Edmonton Oilers. In his three previous returns to Raliegh, the three-time Stanley Cup winner has totaled one goal and three points.

“A place I won at, a place I’ll always remember, a place I still have friends at,” Williams said. “How many guys [are still] on the hockey team? Big turnaround. There’s only [Cam] Ward and [Eric] Staal, I think, of the players that are left.”

-I spoke with Alec Martinez about being being bound for unrestricted free agency after the season and whether he’s aware of any ongoing contract negotiations. Martinez was hesitant to talk about the process, though he did share some time. More on these topics will come from the skies between Michigan and North Carolina.