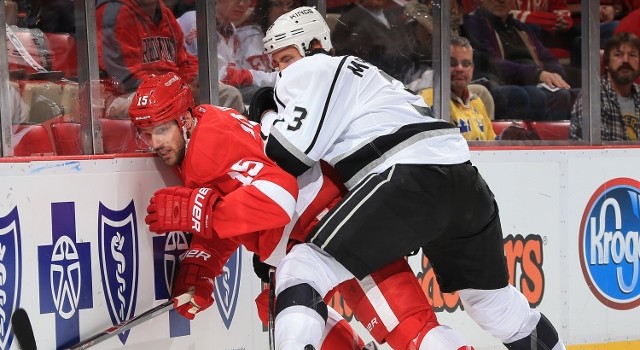 On the loss to Detroit:
It’s tough when you’re not scoring many goals five-on-five to…chase the lead.

On the “most concerning” part of the first period:
You know what? It’s not ‘concerning.’ What’s concerning about it? I mean, you’re going to have leads and you’re not going to have leads. The bottom line is we’ve just played three in four nights, so they’re sitting there waiting. They’ve got four fast lines, six defensemen who can move the puck. They’re going to do that, and that’s what they did. They scored one on a couple power plays – they scored on every opportunity they had.

On how Saturday’s schedule will be determined:
No, we play at five [Sunday]. We practice tomorrow. We have a schedule…We practice and fly to Carolina. We don’t have an early game in Carolina, so we’ve got to skate tomorrow.

On what he’d like to see on the “tail end” of trip:
It’s not the tail end of this trip. The tail end of this trip will be in Dallas. That’ll be the tail end of this trip. [Reporter: What would you like to see on the latter portion of the trip?] I think we’ve got to get contributions from everybody. I mean, quite honest, we’ve played some guys more than they’ve had to, some guys less than we’ve had to. It’s all part and parcel with what’s going on with our team right now. It’s not a very consistent lineup and it’s hurt us. It’s cost us games. We talked about it when we had the long home stand that we were going to have a tough trip, and we had lots going on. We’ll win some. It’s not that hard to figure out. We’ll win some and we’ll lose some.

On it being difficult to face Detroit even with a full group:
Detroit’s a good hockey club…I don’t know what everybody’s talking about. I mean, every game’s a tough game. It’s tough to win.