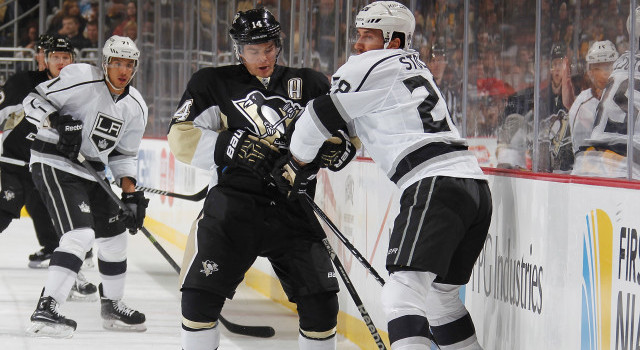 On whether he was surprised to see Justin Williams and Evgeni Malkin scrap:
No, not really. They’re two competitive guys. They both play hard. Both guys probably a little [ticked] off. It happens.

On whether there is an advantage to having a game the day after being shut out:
Yeah, I guess. You can look at it a number of ways, but we have to right the ship right away here. Two losses in a row, that’s enough. We can’t have that. It’s unacceptable for our standards obviously. We’ve got to come out and get [ticked] off tomorrow. Get mad and get a win. Play the right way, stay out of the penalty box. Play good defense, play good in our zone. Be better in the offensive zone getting shots through and getting some chances and working. Not just working, but working smart. Tonight, I thought we chased the game. Penalties were a little part of that, but we just chased the game too much.

On what was needed to generate more offense:
I don’t think enough got to Fleury. I don’t think there was enough good quality chances to beat them a couple times. He saw a lot of those pucks coming at him from long distances. We didn’t have enough traffic. We didn’t have just those good quality scoring chances. You need to score. We need to do a better job offensively. We’ve got to do a better job getting to the net, getting pucks through. Everybody blocks shots in this league. There is not just one guy blocking shots. There are layers in the slot. So we’ve got to be better at that.

On whether he had ever seen a referee take a penalty away from a player after consultation:
I’ve never seen that one before. They were honest. They messed up. There was no penalty. I knew that. I didn’t want to be yelling and screaming at them but we had enough penalties to that point