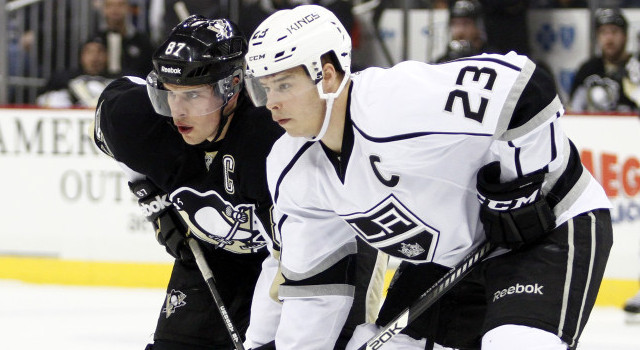 Two nights after performing admirably against an offensively capable team in Philadelphia, the Los Angeles Kings will turn their attention to the Pittsburgh Penguins, a team that has resembled an offensive juggernaut under new head coach Mike Johnston.

Leading the league with 4.12 points per game, the Penguins put up eight goals on the Devils two nights ago and erased an early 3-1 deficit with seven unanswered tallies. Pittsburgh dominated the run of play on Tuesday, out-shooting New Jersey 33-19 and drawing seven power plays to the visitors’ three.

On the other hand, the Kings aren’t exactly slouches defensively. Los Angeles has allowed 1.67 goals per game this season, tying them with Chicago for the fewest in the league on a game-by-game basis.

“This is a team that has proven they know what it takes to win,” Penguins captain Sidney Crosby said of the Kings. “I think we want to go out there and prove that we can do the same. I think whenever you play these teams – they’re defending champs – you expect to be at your best.”

Over the last seven games, the Kings have outscored their opponents 2-1 while shorthanded and have killed off 21 of 22 power plays since Oliver Ekman-Larsson’s overtime power play game-winning goal at Arizona on October 12.

They’ll face a much stiffer challenge against a Penguins power play that leads the league with a 40.6% success rate.

“I think it’s improving,” Regehr said of the penalty kill. “We really didn’t start the season very well with our penalty kill. It’s a huge challenge for us tonight. These guys are clicking at just over 40-percent, by far the best power play in the league. They’re a team that really relies on the power play not just for offense, but for momentum too. They just seem to feed off their power play.

After successfully killing two early Flyers power plays (while scoring a shorthanded goal) on Tuesday, the Kings went the rest of the game without giving their opponents any man advantages.

“The first challenge is to stay out of the penalty box,” Regehr said. “But if we do get some calls against us, we need to do a great job because they execute it at a very high pace out there. They’ve got some very dangerous offensive guys. That’s their bread and butter. We need to try to take that away.”

One wrinkle in tonight’s game: it appears to be Martin Jones, not Jonathan Quick, who will draw the start. Jones is 1-0-0 with a 0.75 goals-against average and .970 save percentage over two games (one start) this season.

Robyn Regehr, on his defensive performance in Philadelphia:
I think Marty and I have been playing fairly well together. It’s been a challenge, especially for him, because Alec now has to play the right side as a left handed defenseman. So you’re at a little bit of a disadvantage and I think you find yourself on your backhand a little bit more than you want. But the good thing with Alec is he’s a very good skater and he’s able to get out of trouble by moving his feet. So I’ve really been trying to work as well as I can with him and trying to be effective as a pair. That’s really all that we’re thinking about.

Regehr, on the challenges presented by heavy ice time in Philadelphia:
You get a little bit more fatigued when you’re playing in your own zone more, I guess. It depends where you’re playing on the ice. If, as a defenseman, you’re in the neutral zone or the offensive zone it’s not as difficult. But when you’re in defensive zone coverage and you’re having to be physical and chase guys around the ice and do things like that, it’s a little bit more tiresome doing that. But that’s part of the game. That’s the way games in the season go. There are times where maybe we’re not doing things as well as we can in our zone, which last game we didn’t. We’re spending lots of time in there and you just have to get through it. You have to make sure you’re doing all those fundamental things that you’re supposed to and they’ll just keep putting you out there on the ice.

Regehr, on playing with Christian Ehrhoff in Buffalo:
As a player, he’s a very good skating, puck moving defenseman. One guy that can play the power play and he’s got a very good shot too. So I think those are his strengths and I think he fits in really well with this team here because that’s kind of the way this team likes to play. A high powered offensive team that likes to really get pucks and get going quickly offensively and get out of their zone as fast as they can. I think that’s why he’s really enjoying it here, I’m guessing.