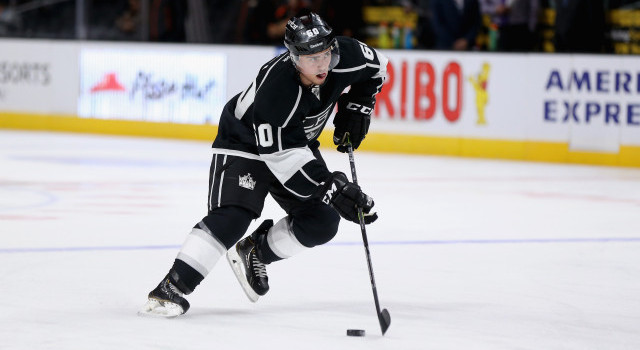 With the Kings eligible for an emergency recall after having dressed only 19 players yesterday, it’s safe to assume they’re on the verge of summoning a forward from AHL-Manchester to play tomorrow against the Pittsburgh Penguins.

Via Article 50.10 of the CBA, an emergency recall means that the Kings, having dressed a number of players below the maximum roster requirements for a game, would be able to call up a player from the minor leagues who carries a cap hit of at most the minimum NHL salary plus $100,000. In other words, if a player has a cap hit of under $650,000, he’s eligible to be recalled and remain with the team for the duration of the “roster emergency.”

That would make Jordan Weal, whose cap hit is $610,000, an ideal target for a call-up. Weal played the entire preseason with the team and after having doubled his points between his first two AHL seasons, now leads the Monarchs with six points (1-5=6) in five games.

Makes sense, right? Not so fast.

Weal may not be able to be recalled by the Kings because his salary – plus a bonus – may put him over the maximum allowable salary to be recalled by the team in an emergency situation. The team has been in consultation with the league over the issue, LA Kings Insider learned from Hockey Operations earlier today.

This, of course, stems from the limited flexibility following the league’s indefinite suspension of Slava Voynov for suspicion of domestic violence while keeping his annual average salary counting against the cap, which was already pressed near the $69M limit at the start of the season. With injuries to Trevor Lewis, Marian Gaborik and Anze Kopitar, the Kings were forced to dress only 19 players yesterday before applying for what everyone expected to be an emergency call-up in advance of Thursday’s game in Pittsburgh.

As it stands, the team appears to be in continued roster limbo. There are other options should Weal not be available; David Van der Gulik carries a $550,000 cap hit and has NHL experience, though I haven’t heard his name mentioned as it relates to the team’s current roster predicament. Of course, the point could be moot if either Anze Kopitar or Trevor Lewis is available to play in Pittsburgh; Darryl Sutter intimated following today’s practice that Marian Gaborik isn’t quite as ready as those two.

Expect more news to follow on this peculiar issue, though the Kings may wait until Thursday to announce any hypothetical recall.