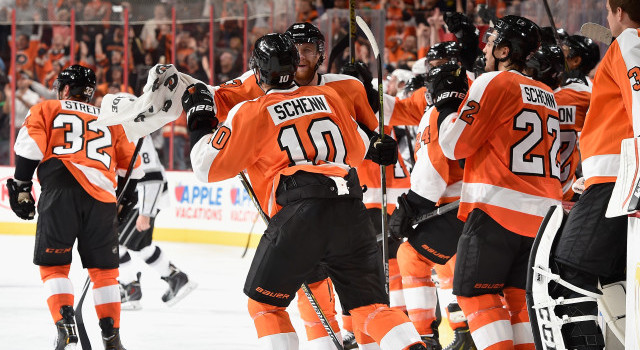 Sam Carchidi: Emery and Flyers knock off Kings in overtime

“Schenn scored his second consecutive game-winning goal, raising the Flyers’ record to 4-3-2. They won their third straight – all by Emery – and snapped the Kings’ six-game winning streak.”

“While Raffl’s game continues to improve, Voracek is blossoming into on one of the league’s most dependable right wingers.”

“Momentum from Schenn’s changeup – and maybe a little shove from Wayne Simmonds – carried both Quick and the frozen 3-inch piece of vulcanized rubber across the goal line 2:36 into overtime.”

“When Richards tied the game at 2 early in the third with his first goal of the season, he was booed, yes; but he got a lot fewer boos than would have, say, Sidney Crosby.”

“Meanwhile, the cast of unexpected heroes continued to grow as Michael Raffl scored his fifth goal of the season -– third in two games -– while fourth-line centerman Chris VandeVelde got a clutch go-ahead marker, as well.”

“The Flyers now lay claim to a three-game winning streak and a record above .500 for the first time this season. Schenn owns a two-game scoring streak of his own, and has three goals in his last five games.”

“He has given coach Craig Berube a chance to win every night and now the Flyers could end the month over .500, which seemed impossible a few weeks ago.”

“For what seems like the first time in forever, the Flyers started this game off on the right foot. They controlled possession, got a good number of quality chances on net, and were indisputably the better looking team.”