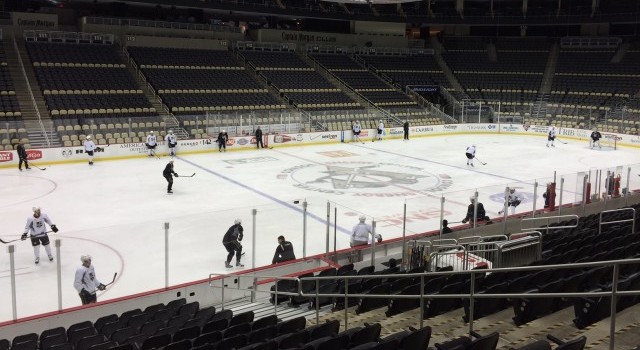 While the Kings continue to wait for a resolution on whether they’ll be able to use an emergency recall on Jordan Weal, injured forwards Anze Kopitar, Marian Gaborik and Trevor Lewis were among the full group that took the ice at the Consol Energy Center in Pittsburgh on Wednesday.

Though Darryl Sutter said “they’re all possible” for tomorrow night’s game, he refined his original statement.

“I think Gabby’s probably not. But Lewie and Kopi are both close,” he said.

With the long season in mind, Kopitar understood the circumstances that could keep him out of the lineup for an extra game.

“I’d rather do it now and really get it taken care of and then get back at it,” he said.

Not to wax poetic during the club’s injury binge, but the current predicament could deprive fans of the somewhat rare Kopitar-Sidney Crosby match-up one game after Kopitar missed a game against Claude Giroux and the Flyers.

“These are fun games, always,” Kopitar said. “You don’t want to miss any games, really. It’s something that I don’t like to do. I don’t like to miss games. I’ll be back as soon as I feel ready and as soon as everybody thinks it’s a good time to get going.”

Lewis, like Kopitar, is close to returning, though it remains to be seen whether his first game since the season opener will take place tomorrow against the Penguins.

“Getting there, feeling better every day and today was the first time I got a little contact,” Lewis said. “I felt pretty good. So we’ll see.”

Anze Kopitar, on whether it was difficult to watch the team play down a forward:
It wasn’t easy for me because I knew we were going to play with 19 guys. So I wanted to play. But at the same time, it’s early in the year and you have to be smart about it somewhat.

Kopitar, on some members of the team playing big minutes:
That’s what it is. I feel for Kyle because on some nights he gets what? Six, seven or eight minutes, it’s tough to do. When you’re on the ice for that amount of time, it’s tough to get it going. Once you do get on the ice, you almost try to do too much and it sometimes backfires on you. I thought all the guys played – the start was not the way I’m sure they wanted to start. But they pulled it together and at the end of the day we got a point out of it. So that’s a positive in a tough building. We were going for two, but it doesn’t always happen.

Lewis, on whether he is preparing as though he will be playing:
Yeah, I mean I’ll talk to the trainers and stuff. See what they have to say. But I’m feeling better out there and like I said I just have to make sure I’m 100-percent.

Lewis, on conversations with the staff as they pertain to injuries:
I think Darryl trusts us and I think he knows that it’s not worth going out on if you’re not ready and hurting yourself and being out for another three weeks again. It’s just kind of a thing where you have to make sure you’re ready and you’re all the way healthy so you don’t re-aggravate it.

Lewis, on the challenges of watching games instead of playing in them:
It’s the worst. You just want to be out there with the guys. Especially with last night, we didn’t have enough forwards and you want to be out there and you want to help your teammates. It sucks watching so I’m trying to get back as fast as I can, but make sure that I’m 100-percent ready to go. [Reporter: It’s a long season.] It is a long season. So you want to make sure you’re prepared and can play the rest of the season.