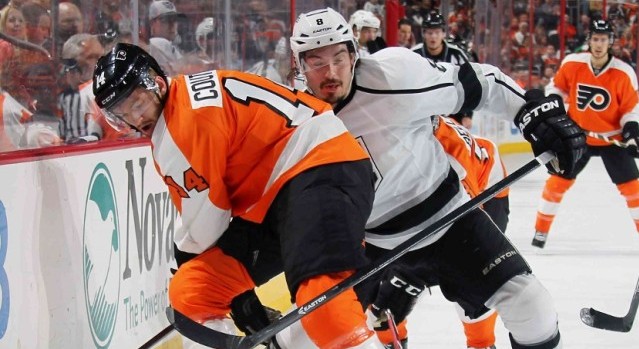 Drew Doughty, on earning a point in the overtime loss:
We played OK in the second and third, but our first period really hurt us. That’s where we los the game, really. It wasn’t that overtime goal, it was before that. We should’ve never been down in the first. We just didn’t come out ready to play. That’s no one’s but our faults.

Doughty, on Brayden Schenn’s game-winning goal:
I thought it was no-goal. The guy beside the ice said ‘No goal,’ but apparently the ref in the neutral zone overruled it or whatever and he called it a goal, so I don’t really know how that works. It didn’t go our way. We can’t change it now. We’ve just got to look forward to the next game, and we’ve got to win that one.

Doughty, on playing “significant minutes”
I’d love to play as many minutes as possible. I’ll play 35, 40, whatever it takes. I felt really good out there tonight. I thought I was flying, although I was on for a few goals against, whichj I’m obviously not too happy about, but those are some things we can fix and we can look at and get better at.

Doughty, on earning a road point without key players in the lineup:
I think we could’ve easily won that game still. Like I said, it was just that first period. Obviously with our top forward in the lineup it’s going to be tough to win games, but I thought some other guys stepped up and played well, but I also think some other guys can do a little bit better of a job when we have key guys out of our lineup. Hopefully we get ‘em back soon.

Toffoli, on the referees’ interpretation of the game-winning goal:
I didn’t hear anything. I think it was just Mike over there talking to them. They made the call, and it is what it is.

Toffoli, on his shorthanded goal:
It was a good bounce for me. They tried to throw it back to the D-man and it just bounced over his stick. I had a breakaway from our blue line, so I had kind of time to settle it down and make a move.

Toffoli, on the Clifford-Stoll-Williams line:
Yeah, I think they did a good job. They had a couple chances. Stolly almost buried one there in the second. I mean, that’s just the way it goes. It just wasn’t our night tonight, and we’ve got to start thinking about Pittsburgh and be ready to start from the drop of the puck.

Toffoli, on playing with only 17 skaters:
We were just rolling. We were just trying to keep shifts short. I mean, everybody wants to play, and you’ve got to take what you’re getting. You’ve got to play your best when you’re getting your ice time, and I think we came up a little short tonight.