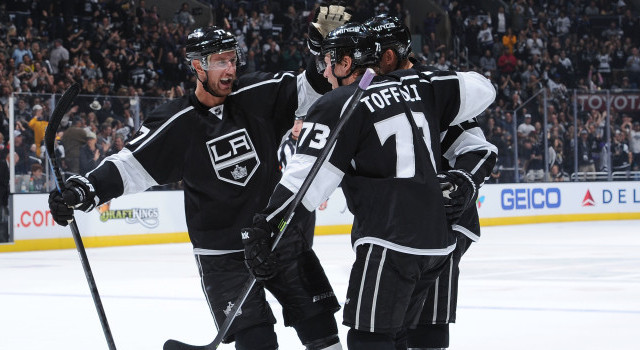 Jeff Carter was named the NHL’s First Star of the week earlier today. The Kings only played twice – and Tyler Toffoli (1-4=5) also could have been nominated – but Carter notched six points (2-4=6) and a plus-three rating in helping the Kings punctuate the first 6-0-0 home stand in club history. Like Toffoli, he posted four points in yesterday’s game in which Los Angeles surrendered the first goal but scored five of the next six before defeating Columbus in a rout. Though he had scored twice previously against the Blue Jackets, his Sunday outburst gave him four goals, eight points and a plus-two rating in seven games against the team that traded him to the Kings in February, 2012.

I meant to cover this news yesterday, but an afternoon game made that a bit difficult. There have been several recent Slava Voynov updates, with Rich Hammond reporting Saturday night that the lawyer representing Voynov’s wife alleged that Voynov didn’t intend to hurt her.

Via the Orange County Register:

Walsh did not object to the assertion, made by Voynov’s lawyer, that the incident was an “accident,’’ but declined to go into specifics about the incident. Walsh said that Varlamova did suffer injuries, but not from being “punched or struck’’ by Voynov, and that she was never admitted to the hospital.

Walsh said that the couple has resumed living together and does not intend to separate.

Today, Katie Strang of ESPN.com reported the progress being made from a legal standpoint and noted that the Redondo Beach Police Department and LA County District Attorney are still reviewing available evidence.

Strang also noted that Voynov has not chosen to act on the provision to appeal his indefinite suspension.

According to Voynov’s agent, Rolland Hedges, Voynov continues to skate on his own to keep up his conditioning in the case of future reinstatement.

Hedges said that he and his client are prepared to wait for the legal process to play out before determining what next step to take.

Though the collective bargaining agreement provides a mechanism for which Voynov can appeal his suspension, they are not rushing to do that until there is some sort of resolution on the legal front.

DOWN ON THE FARM

The Manchester Monarchs are 3-2-0-0 through their first five games after splitting their first two home games of the season on Friday and Saturday night.

On Friday, the Monarchs jumped out to a 4-0 lead over the Portland Pirates (AHL-Arizona) before claiming a 5-2 win in their home opener. They followed the win with a 5-0 loss to the Providence Bruins (AHL-Boston) on Saturday night. In Friday’s game, Nick Ebert and Justin Auger scored their first professional goals.

The diminutive line of Jordan Weal (1-5=6), Brian O’Neill (3-2=5) and Sean Backman (1-3=4) have paced the club offensively, while Nic Dowd has potted four assists through the first five games. Andrew Bodnarchuk remains out with a knee injury suffered during training camp in Los Angeles.

J.F. Berube has posted a 2-1-0-0 record, a 1.76 goals-against average and a .931 save percentage through four games (three starts), while Patrik Bartosak stopped 24-of-26 in a win at Norfolk on October 18 before being pulled after 33:43 of action against Providence on Saturday.

The Monarchs drew healthy crowds for the first two home games, which can be a challenge early in the season when competing against other sports and entertainment options and before group sales accumulate. After drawing 5,939 on Friday, the Monarchs drew 6,052 on Saturday.