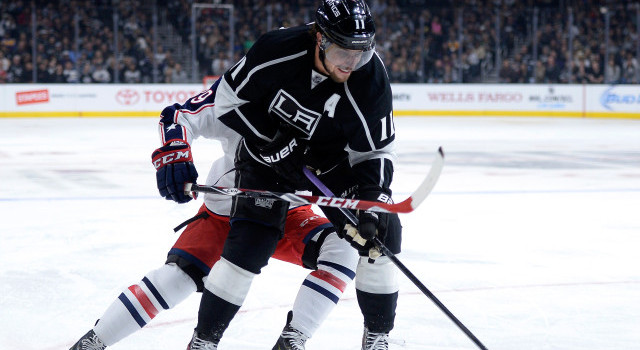 Anze Kopitar’s last shift of the game came roughly two-thirds of the way through the second period before he walked down the tunnel to the dressing room and did not return. A Kings representative noted in the third period that he suffered an upper-body injury and was not expected to return to the game. In all, Kopitar attempted one shot in 10:39 of action.

After the game, Darryl Sutter revealed little of the nature of the injury, saying “He’s all right” when asked both about the severity of the injury and whether he’ll travel with the team on a six-game road trip that opens Tuesday in Philadelphia. The Kings are expected to depart tomorrow morning and won’t practice at Toyota Sports Center on Monday. The next time the team takes the ice together will be at the morning skate at the Wells Fargo Center on Tuesday.

Though the last shift credited to Kopitar in the game’s play-by-play log came at even strength at the 12:34 mark of the second period, Dwight King said that “I think he did it on the power play, to be honest” when asked about the injury after the game.

“I didn’t notice right away, but he’s walking around here. He seems to be Kop, so that’s good,” King said.

Kopitar has been remarkably durable in his career. Since suffering a broken ankle that ended his season 75 games into his 2010-11 campaign, the only regular season or playoff game he did not participate in over the last three seasons was the 2012-13 season opener, which was missed because of a knee sprain suffered late in his tenure in Sweden during the lockout.

Teams deal with adversity and injuries in all sports, and Los Angeles would be prepared to soldier on without its top offensive player should Kopitar miss any period of time.

“It is a long season. Injuries are a part of the game,” King said. “Obviously when it’s a key player like that It’s a little tough to replace, but i think guys in this room know what it takes to win, and that’s the biggest thing you work on throughout the season.”

Should Kopitar be unavailable for the start of the road trip, there would be roster complications due to the Kings’ salary cap situation and the lack of healthy and available bodies. With roughly $510,000 of cap space, according to CapGeek.com, they do not have enough space to recall a player who earns the league-minimum salary from Manchester. As explained earlier this week, there are options available that would allow the Kings to recall a player if needed. One option would be to place a player on Long Term Injured Reserve; the other would be to play with 11 forwards and six defensemen and then apply for an emergency roster call-up.

Should LTIR be utilized – which is a hypothetical, at this point – the Kings would have the cap space to recall a defenseman from AHL-Manchester; it’s explained well in this earlier LAKI post. Though flexibility is afforded to teams that place players on long-term injured reserve, teams must first deem that the player “will be unfit to play” for at least 24 calendar days and 10 regular season games, per the CBA. Should Trevor Lewis be placed on LTIR, he would be eligible to return on November 2 at Carolina, as his placement on IR is retroactive to October 8. Should Gaborik be placed on LTIR (he is not yet on injured reserve), he would be eligible to return on November 6 against the New York Islanders.

Because both Lewis and Gaborik have resumed skating, the Kings could be hesitant to utilize LTIR. It’s also too early at this point to know the exact severity of Kopitar’s injury. But because of the club’s cap space, injuries to three players and Slava Voynov’s indefinite suspension, the Kings could be in a bind roster-wise should Kopitar have to miss any amount of time.

Ran into Kopitar in hallway. He didn’t want to stop/talk but said, “I’ll be all right. Eventually.” Then grinned. Hmm, OK.