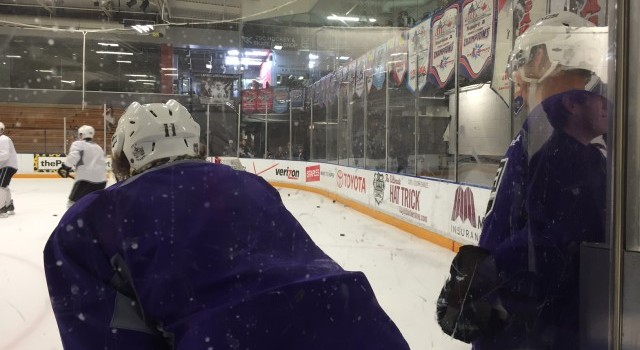 Good morning from El Segundo, where the Kings are practicing in advance of their 1:00 p.m. game against the Columbus Blue Jackets tomorrow. Several notes from practice:

-The most significant bit of news today was that Trevor Lewis skated with the group for the first time. He wasn’t taking part in line rushes and doesn’t appear set to return to the lineup, but Saturday’s practice marked the first time he had skated with the team after he skated alone for several days.

-Marian Gaborik also took the ice, though he did so at the end of the team’s practice session. Should Lewis and Gaborik be available, I’ll have stories on their progression up later today.

-Jonathan Quick left the ice first. Because today’s practice precedes a day game, this is an indication that he’ll draw the start against the Blue Jackets tomorrow.

-Lines from practice didn’t change from Thursday’s game. Kopitar centered King and Brown, Carter centered Pearson and Toffoli, Stoll centered Andreoff and Williams, and Richards centered Clifford and Nolan. Defensive pairings did not change, either, so expect Muzzin to skate with Doughty, Regehr to skate with Martinez, and McNabb to skate with Greene tomorrow.

-Lots more to come on a busy Saturday…