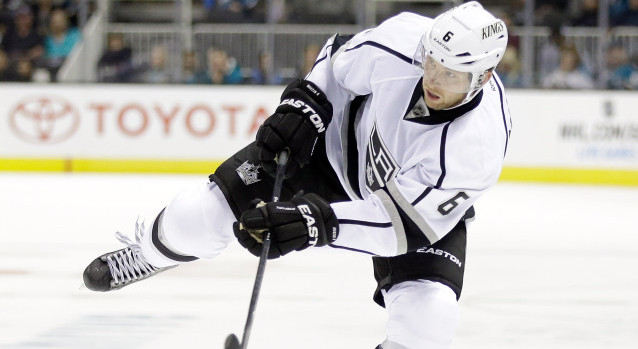 Jake Muzzin (upper-body) hasn’t played since suffering an injury in the preseason game against the Avalanche in Colorado Springs on October 2. Though he has been practicing with the team, he hasn’t been cleared to return to game action.

On Saturday, Darryl Sutter provided an update on the defenseman.

Darryl Sutter, on Jake Muzzin’s progress:
He’ll get his X-ray on whatever his three-week date is, and go from there. He looks fine, but it hasn’t changed in terms of the same thing we said before. It’s not coaches making the decision or a player making the decision. Doctors are going to [make the decision], so just wait.

If Muzzin gets an X-ray three weeks from the day of the injury, he’s looking at an appointment with the doctors on Thursday, October 23. The Kings play the Buffalo Sabres at Staples Center that night. Given that information, and because Drew Doughty was skating alongside Brayden McNabb at practice today, Muzzin won’t make his season debut against Minnesota tomorrow afternoon.

The announcement that Muzzin signed a five-year, $20-million extension was made on Wednesday. More on Muzzin’s extension here.