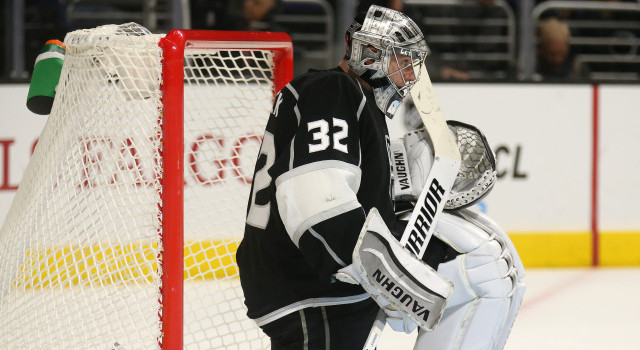 Jonathan Quick recorded his 32nd career shutout in Los Angeles’ 1-0 shootout win over the St. Louis Blues on Thursday and moved into a tie with Rogie Vachon for first place all-time on the Kings’ all-time list.

Among the records Quick has set or is nearing:

On the 1-0 shootout win:
It feels good. They’re a great team, so to get two points against them, either home or the road, it’s always difficult. We were able to do that tonight. We’ve got a game in a couple days, got to get ready for that one.

On facing 43 shots:
You know, every game’s different. There are games you’re going to get 15 shots, there are games you’re going to get 40. That’s how it works sometimes. Both of them create their own challenges. Like I said, they’re a great team, and to be able to get two points against them, that’s a team effort. PK was great, the way we fought all game long. It’s good to get the two.

On tying and surpassing Rogie Vachon in many franchise lists:
You know, what he meant to this franchise, obviously everybody knows. To be put in that category and a lot of those statistics, which I don’t buy into a lot of statistics – the wins are what mean a lot to the guys in here and to myself – it’s nice, obviously, and it’s humbling to be put in that category. But at the same time, it’s a team effort. Every time to shut a team out for 60 minutes, that takes 20 guys, so it’ll be my name that goes next to the shutout, but it’s a hundred percent the group that went out there today.

On his glove save on Jay Bouwmeester:
I forget how it got out to him, but he was in the slot and somebody came sliding across trying to block the shot, so you had a good feeling he was going high. You’re able to make the save, and the game kept going there.