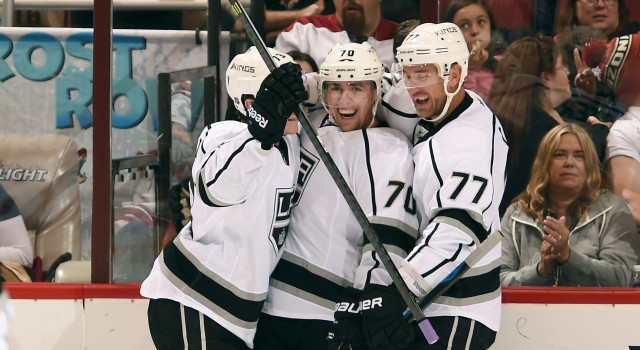 While the Pearson-Carter-Toffoli line has found success of the rush, much of their production has come from excellent work down low. They’ve been an effective team working the puck deep, making hits below the goal line and generating high quality opportunities.

“I think that’s just one of our team’s strengths is our forechecking,” Tanner Pearson said. “The harder the forecheck, the more pucks we’re going to turn over, and right now it’s working out for our line.”

It has certainly worked well for Pearson, who has goals in three straight games and four total. Two of those goals came from lifting up the stick of an opponent to steal the puck before cashing in on his opportunity.

While the Kings are an effective forechecking team, it’s not the only way the team has been able to create offense. The team has excelled in its scoring versatility, so to speak.

“They’re scoring goals in different ways, contributing opportunities in different ways, which at the end of the day in this league, that’s what it’s about,” Sutter said. “Most goals are scored close to the net, and the ones that aren’t, you see on TV late at night. So they’re all capable of scoring goals. If you’ve looked at the goals they’ve scored lately – obviously Tyler’s goal last night is a highlight goal. But Tanner’s is in the blue paint. Jeff’s is three guys working down low. The goals they scored the [game] before, they’re rebounds, tap-ins. You’ve got to pay the price to score goals or get opportunities, and right now they’re doing a real good job of that and they’re being rewarded.”

They sure are, having combined for 16 points and a plus-22 rating over the last three games.

Not surprisingly, the trio has also been in the black possession-wise, having combined for 171 shot attempts for and 134 against while at even strength.