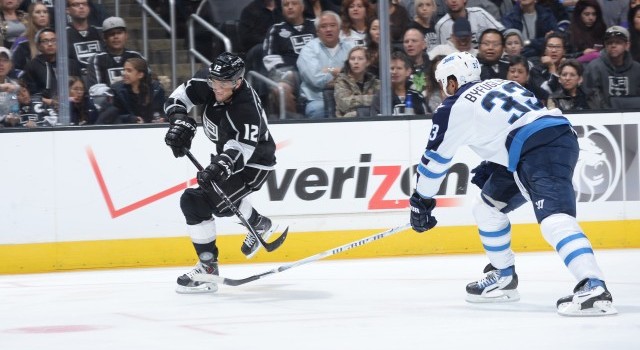 The Los Angeles Kings’ 20 healthy players will take the ice tonight at Staples Center against the Edmonton Oilers, who will be without Ryan Nugent-Hopkins, Jordan Eberle and Jeff Petry.

Marian Gaborik won’t play for the Kings and has been deemed “day-to-day” with an upper-body issue, per Hockey Operations.

With Gaborik out, Mike Richards is expected to move to left wing alongside Anze Kopitar and Justin Williams, while Andy Andreoff will make his NHL debut as a center flanked by Kyle Clifford and Jordan Nolan.

Because the Kings are pressed up against the salary cap – CapGeek.com lists Los Angeles’ cap space at $342,500, whereas the minimum NHL salary is $550,000 – they are limited in their approach to handling injuries to Gaborik, Jake Muzzin and Trevor Lewis. Teams do not get cap relief by placing a player on injured reserve. Though flexibility is afforded to teams that place players on long-term injured reserve, teams must first deem that the player “will be unfit to play” for at least 24 calendar days and 10 regular season games, per the CBA. At this point, the Kings are not expected to place any of their injured players on LTIR.

As of this morning, the Kings were considering whether to place Lewis, who has not resumed skating, on injured reserve. Again, due to cap constraints, they wouldn’t be able to recall any players from AHL-Manchester, though the move could afford them the flexibility if they choose to do so in the future, as their amount of cap space incrementally rises daily.

Though Muzzin has been encouraged by his progression, he won’t play tonight.

The Kings aren’t currently able to use an emergency recall of a player; in order to do so, the team would have had to play a game with fewer than 20 players (two goaltenders and 18 skaters), per Article 50.10 of the CBA.