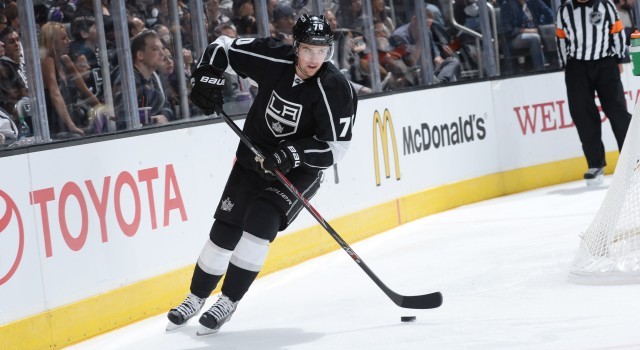 Tanner Pearson, on his line’s rush chances:
I think we had a couple two-on-ones. We had three for sure tonight, if not four. It’s just kind of doing our neutral zone forecheck and then turning pucks over and going from there.

Pearson, on getting bodies and pucks to the net:
Yeah, I think our goal tonight was to get as many pucks to the net as possible. We didn’t have a lot of shots last night, but tonight it was a lot better. Toff’s goal was a tap-in, and then I think the shift after, I hit a post on the open net, and then Toff missed the open net right after mine. It’s just the way it was going tonight, but luckily we came out with a win.

Pearson, on whether his line’s chemistry has carried over from the playoffs:
Yeah, I think so. I think right from camp, it kind of clicked from last year. Chemistry’s such a big thing in this league, and you want to get as quick as possible. I think we’re doing that.

Pearson, on what has worked well for him, personally:
I’m just trying to contribute with my part. I don’t want to be a liability in our end, I want it to be my thing – getting pucks out and that kind of stuff. I’m just trying to do my job that I need to do and go from there.

Pearson, on whether he feels like a rookie:
No, not really. I think being with them in the playoffs the year before and going so far in camp last year and being up and down so often, it’s kind of I’m just another one of the guys. Even when I came in last year, it’s wasn’t as a rookie. It was ‘you’re another one of the teammates, and you’re here to do your job.’

Pearson, on whether it’s “odd” that he’s technically a rookie having won a Stanley Cup:
It’s different, I think. It’s obviously there, but you’re not look at winning the Calder. You’re looking at winning and trying to go as far as we did last year in the playoffs. Hopefully we keep on playing well and see what happens.

Pearson, on whether he has returned to the Kings with a greater focus:
I think just winning the first time around kind of makes you hungry for another one. We want to get to that state of hockey as quick as possible. I had kind of a slow start, but I think today we made some big progress.

Pearson, on not being able to coast in the Western Conference:
No, you look at some of the moves the Western teams made this year, it was pretty big. We have our hands full this year. We’ve just got to come to play ready every night.

Toffoli, on his line with Tanner Pearson and Jeff Carter:
I think we’re playing our game, having fun, and making plays. We have to do what we’re told to do. We’ve got to create chances and we’ve got to score goals if we’re going to stay together and be effective. We’ve got to keep working hard and keep going.

Toffoli, on what allowed for the line to be effective:
I think just moving our feet. I think our breakouts were very good tonight. We were good on the walls, our line. Just created lots of chances off the rush, but also down low we were making plays and bringing the puck to the net.

Toffoli, on the chemistry he has with his linemates:
I think the chemistry comes with hard work. Jeff is very easy to play with, obviously. He’s one of the best players in the league, personally I think. Tanner and myself, we read off of him and we have to skate hard and keep up with him and make plays and score goals.

Toffoli, on being comfortable playing with Tanner Pearson:
Yeah I think we’re comfortable playing together, but I think Jeff helps us out a lot. He’s really vocal. When we’re struggling, he’s making sure he’s getting on us. Making sure we get better as each shift goes along. He wants to do well and so do we and we want to help the team win games and we’ve got to do whatever we can.

Martin Jones, on getting a win in his first start of the season:
I felt good. I was able to get some pretty good time preseason. I felt good in game situation, which was good.

Jones, on whether he felt he had enough work coming into the game:
Yep, like I said, I was able to get some good game time in the preseason. Other than that, it comes down to practice habits and making sure you’re doing the right things to get prepared. There are going to be stretches this year where I might not play for a week or two and I have to make sure I have the right habits and make sure I’m preparing the same way.

Jones, on what the team was doing well early in the game:
I thought we did a good job in front of both nets actually. They did a good job of getting bodies and throwing pucks towards the net. We always seem to come up with the puck in front of our net and in front of their net too. Bang a couple of goals home.