OVERTIME
4:07 – Penalty over.
1:45 – Lots of space on the ice. No real high quality scoring opportunities since the conclusion of the power play.

THIRD PERIOD
20:00 – Jones in for Quick. Quick is now 36/38 through four preseason periods. 1:58 remains on Colorado’s power play.
18:15 – Doughty hip check on Holden. 6-foot-4 defender falls to the ice hard.
18:02 – Penalty over. Avs get a couple of odd-angle shots but nothing too threatening.
15:25 – PENALTY COL. High-sticking on Erik Johnson.
14:35 – Pearson bats the puck out of mid-air, misses wide from the doorstep. Would have been impressive. Oh well.
14:30 – Martinez-Doughty power play pairing.
13:25 – Penalty over.
13:05 – MacKinnon threads an impressive needle to Johnson, who had joined the rush. Jones blockers away his quick release.
9:26 – MacKinnon drives down low with an impressive stickhandling move but is immediately met by Muzzin and Doughty before losing the handle of the puck, which flutters back to Jones. Whistle, time out.
8:45 – PENALTY COL.

Great hustle by Clifford to negate an icing, draw a penalty. #LAKings to the PP with 8:45 remaining in the third period of a 1-1 game.

6:45 – Penalty over.
5:36 – PENALTIES – LAK-COL. Landeskog takes exception to a Muzzin hit, engages the Kings’ defenseman. Both will head to the box. Muzzin may get another two here. He does. Avs power play.
3:36 – Power play over. No real sustained Colorado pressure.
1:07 – COL PENALTY. Barrie goes off for holding during heavy Kings pressure.
0:00 – Period over. Some good looks off deflections late, but everything that Berra isn’t stopping is trickling wide or getting blocked.

SECOND PERIOD
20:00 – Underway from the World Arena, which is a warm and comfortable rink.
17:59 – PENALTY COL. Clifford, who had earlier taken an offensive zone penalty, this time draws one by going to the net. Andreoff takes offense, shares some words with the Avs. Nothing escalates.
16:30 – Nice Berra save on a late-developing mini-two-on-one. King to Brown; Brown couldn’t stuff it past the Avs netminder.
15:59 – Penalty over.
15:58 – Muzzin, all alone on the inside of the left circle, hits the post shortly after the conclusion of the power play.
13:12 – PENALTY LAK. Muzzin goes off for tripping. Dubious call; O’Reilly was operating at top speed and simply fell.
12:15 – PENALTY COL. Duchene off for interference. Was in a bit of a blind spot on the ice; could’ve been a make-up call.
11:37 – PENALTY LAK. Overofficiating. Slashing on Voynov.
10:50 – Collision between Brown, Muzzin in the defensive zone. Crowd gasps.
10:20 – Alex Tanguay hits the post and crossbar. Puck don’t lie; he set up a pick in the neutral zone that was borderline interference.
9:37 – Penalty explosion over.
9:06 – Opa Gangam Style.
6:50 – Fine Quick save off a Tanguay shot from the slot.
6:20 – Quick stops an O’Reilly slapshot from the slot; Avs can’t find the rebound. High quality opportunity, that.
5:50 – Cracknell’s wrister from the high slot denied by Berra, who has been pretty good so far.
3:24 – PENALTY LAK. Schultz goes off for interference. Quick makes two quality saves from close range, and a mad scramble leads to the penalty. Didn’t see the infraction; I’ll take the official’s word for it.
0:50 –

Nice pokecheck and one-on-one defending by McNabb on Duchene, who was getting close to top speed.

0:02 – PENALTY LAK. Second time Kyle Rehman has whistled Jake Muzzin for a phantom trip. Brian Pochmara was 30 feet closer to the play and didn’t raise his arm.
0:00 – Period over.

FIRST PERIOD
20:00 – We’re under way. The internet reception here is poor, so be patient with any gaps in reporting.
17:35 – Cracknell odd-angle shot catches Berra high on the left shoulder.
17:10 – Doughty wrister from the point catches Berra up high as well.
16:23 – GOAL KINGS. 1-0. Toffoli (Carter, Pearson), 3:37. On a two-on-one, Carter outwaits the diving Avalanche defender before issuing a pinpoint cross-crease feed that Toffoli redirects on the backhand. Toffoli didn’t have to move his stick; Carter just found it.
14:12 – Brad Stuart separates Adam Cracknell from the puck on an attempted Kings zone exit. Puck travels back through the neutral zone, where the Avs take over.
12:30 – Brown elects to shoot on a two-on-one. His wristshot is stopped by a left pad save by Berra.
4:21 – After a flurry in the Kings’ end in which Alex Tanguay created a turnover off Brayden McNabb’s stick, Los Angeles intercepted a slot-bound pass and started a three-on-two in the other direction. Cracknell’s shot was stopped by Berra, with the rebound popping straight in the air. Nolan crashed the net; the force of three bodies converging pushed the net off its moorings.
2:14 – PENALTY LAK. Offensive zone tripping; Kyle Clifford sits.
1:25 – Carter, with some space down the right wing, is denied on a shorthanded wristshot from the right circle.
0:23 – MacKinnon appears dangerous around the Kings’ net, but doesn’t get much more than an odd-angle shot off.
0:14 – GOAL AVALANCHE. 1-1. Talbot (Johnson), 19:46. After an ineffective 1:45 of power play time, Talbot skates through the middle of the slot unimpeded, goes high glove on Quick.
0:00 – Period over. 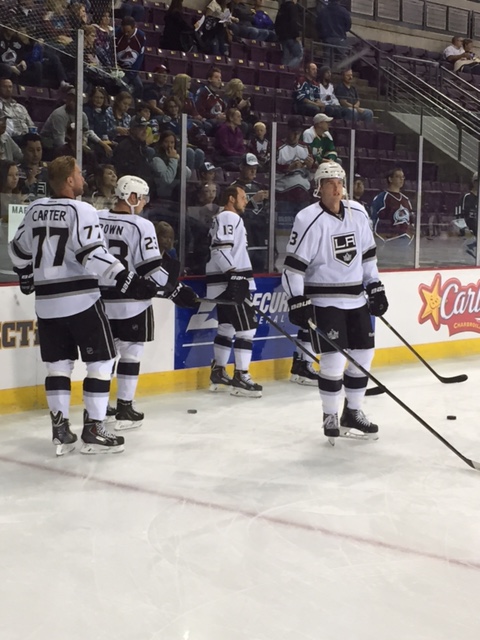 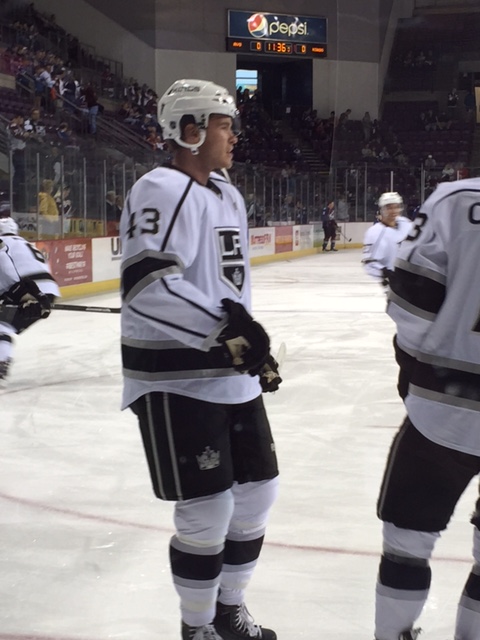 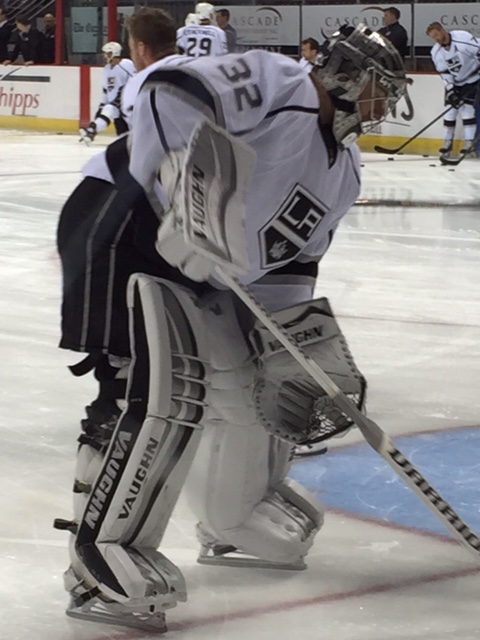 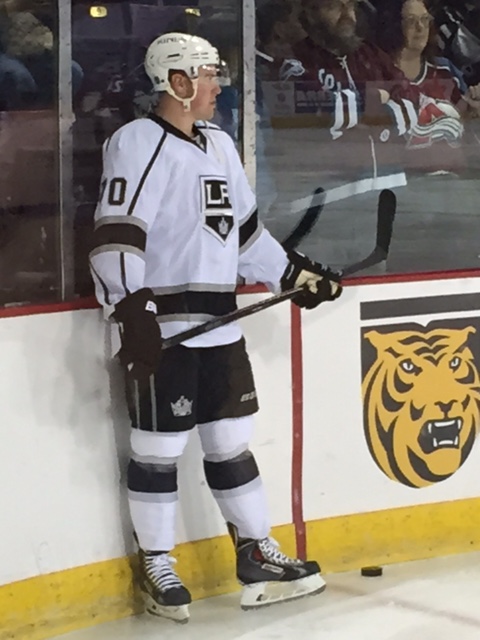 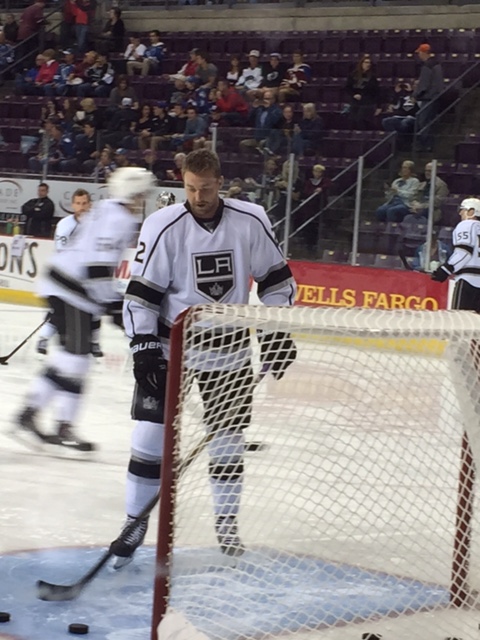 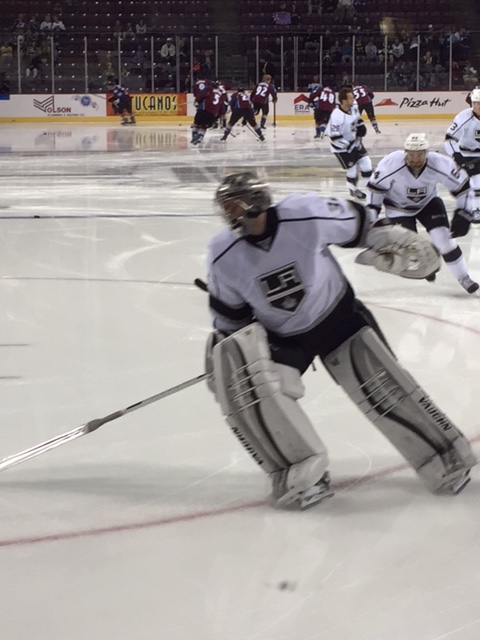 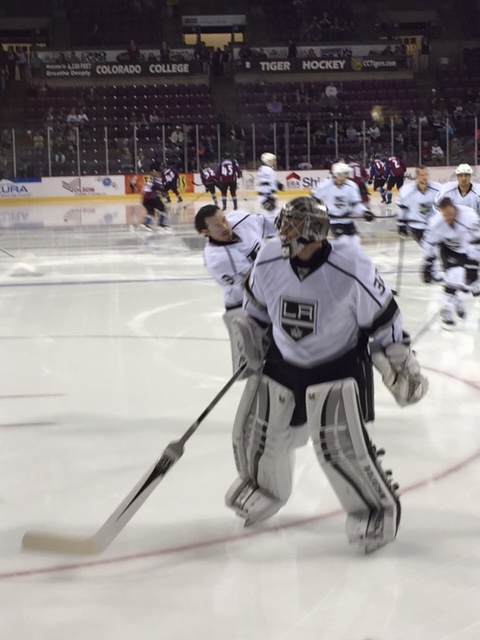