How the short off-season affects the Kings (and camp) 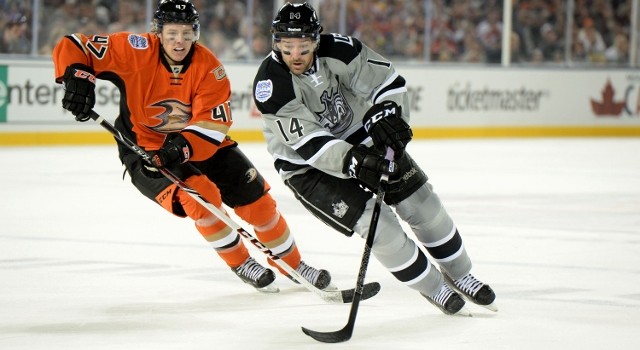 When the -13 season opened on January 19, 2013, 221 days had passed since the Kings hoisted the Stanley Cup on Staples Center ice for the first time.

When their second banner drops on October 8, 2014, only 116 days will have elapsed since the last time they took the ice in a game that mattered.

“It doesn’t really feel like I left, to be honest with you,” Justin Williams said.

There are certainly different circumstances that lead into the most triumphant season openers in Kings history.

“When we came out from the lockout the last time, we got our butts whipped by Chicago and we weren’t ready to rock,” said Williams.

The work stoppage certainly put a wrench into not only the team’s plans to commemorate its first title, but also in the off-ice habits and preparations that were disrupted by an uncertain labor environment.

“The year we won it before, we went in as if we were going to have camp,” recalled Darryl Sutter. “Guys were ready for it. I remember talking, and players saying that they were more ready in September than they were in February.”

The last three months were not exactly The Endless Summer. Several synonyms of “shortened” that were used to describe the 2012-13 season – “truncated,” and “abbreviated” were among them – can now be applied to the preparation by a Kings team that experienced an off-season that was considerably shorter than all but a small handful of other high quality squads.

“It’s a totally different situation than most,” Sutter said.

The plan will be to rotate a heavy amount of players until the final 10 days of camp, which will conclude with the team traveling to San Jose, Colorado Springs and Las Vegas to wrap up a preseason with three games in five nights.

And there’s only one player on the team who has ever defended a Stanley Cup title after a “regular” off-season.

“I might be the wrong guy to ask that question, because in Carolina we missed the playoffs the next year after we won,” Williams said. “Listen, that’s where professionalism comes in. That’s just getting yourself ready, get focused, start again, and that’s what we do. This is our job. The next year is coming up.”

“I like short summers. It means less time in the gym, more time on the ice. You take a couple weeks off because it’s a lot easier to stay in shape than to get yourself out of shape and get back in. So I enjoy it. I like it.”

No team has repeated as Stanley Cup champions since the Detroit Red Wings in 1997 and 1998.

Justin Williams, on why it is difficult to repeat as Stanley Cup champions:
Well, the fact of the matter is it’s hard. It’s damn hard. No one’s repeated since then because – granted there’s more parity in the league, there’s 30 teams in the league now, there’s a salary cap, there’s short summers to deal with, there’s questions of a team sticking together. Listen, we’ve got basically the same team, and I feel our hunger is going to be exactly where it needs to be because we felt what it tasted like to have it and then have it taken away from us. It’ll be good.

On whether he paid attention to the Montreal Canadiens’ dynasty:
How old do you think I am here? [Laughs] I mean, I remember the Red Wings always being good, the Oilers in the late 80’s. You just remember the great teams trying and wanting to be one of them. [Reporter: And how hard it is to sustain that, and now you know.] Listen, we don’t know how good we can be, but we’re going to give it our all and we’re going to find out how far we can take this.

On whether he has seen anything different in Mike Richards:
I mean, it’s tough to tell. I know he’s in shape. He did quite a few pull-ups in there while I was watching him. Listen, I’m sure he wants to better himself and establish himself as one of the premier centers in the league. He’s done all the right talking, and it seems like he’s done a lot of work as well. We’ll see. I never question him. He’s a great player, and him being at the top of his game is only going to make us better.

On what sets Anze Kopitar apart from his peers:
I’ve got to start talking about Kopitar already? [Laughs] I always talk about him. I don’t know. He’s our best player. He does it the right way every time. What sets him apart is that he’s big, and he can skate, and he can protect the puck from anyone. If you’re trying to get it and he doesn’t want you to get, you’re not going to. His humbleness and his team approach is what makes him good, too.