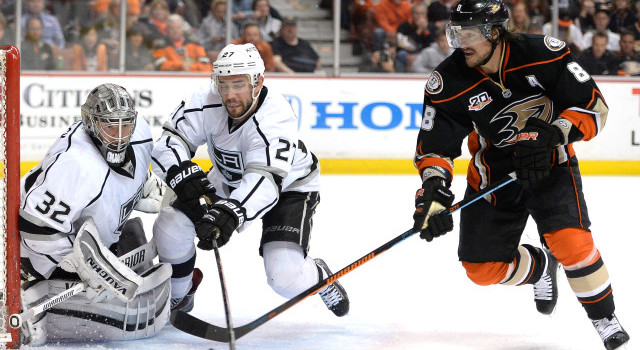 In his newly released autobiography, Teemu Selanne, one of the greatest wings to ever play hockey and the most revered player in Anaheim Ducks history, slammed Bruce Boudreau, the coach who has led the Ducks to back-to-back Pacific Division Championships. The book, titled Teemu, was written in Finnish, though snippets have been translated to English via Google Translate, and Helsinki and Vancouver-based Finnish reporter Juha Hiitela has shared several brief excerpts via Twitter. Helene Elliott also obtained a PDF version of the book and consulted with Hiitela in producing the LA Times’ story.

To this point, Boudreau has not responded to any of Selanne’s claims.

There are several references to the Kings in the reports that came out this morning.

He also reveals that he spoke with Kings head coach Andy Murray and GM Dave Taylor already in 2005. After Burke said Ducks have no money.

”Then I heard nothing from then and saw on the news that they had signed Valeri Bure.”

In first intermission of Game 7 against LA, Kings lead 3-0. Teemu took his cell phone in the locker room and sent a txt msg to his wife..

The content of that text message, which contains a word unfit for LA Kings Insider, can be found here.

Via Chris Johnson of Sportsnet.ca:

The book also reveals that Selanne considered contract offers from the Winnipeg Jets and Los Angeles Kings during the summer of 2013 because he wasn’t keen on another season under the Ducks coach. Ultimately, the two men sat down for a meeting where Selanne claims he was promised power-play time and around 15 minutes of ice time per night.

He ended up falling a little short of that mark with an average of 14:07.

The English version of Teemu is expected to come out in 2015, per Hiitela.