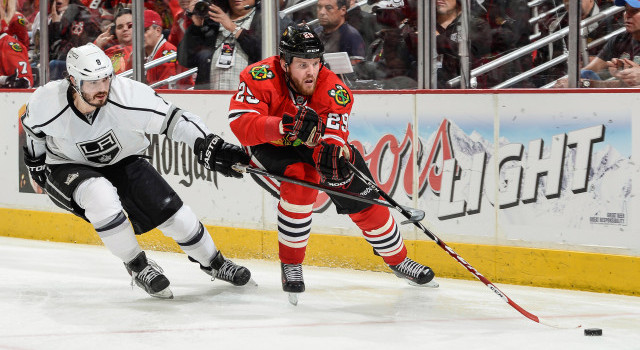 When the Toronto Maple Leafs hired a new Assistant General Manager in Kyle Dubas, a young executive acknowledged to be a proponent of the widened use of hockey analytics, and several other teams decided to bring aboard bloggers and statisticians, there appeared to be a concerted push to incorporate more possession stats, zone exits and entries, and other advanced tools that could help teams form a more accurate evaluation of their own players and players around the league.

The Kings have been acknowledged to be among the many teams who place value in puck possession and grade at or near the top of the league in advanced statistics.

Darryl Sutter was asked in March about whether the club uses advanced statistics.

“I think every team does now,” he answered. “For sure.”

Los Angeles Kings General Manager Dean Lombardi isn’t one to surrender his own analytics blueprint, however.

He acknowledged that he has spoken on the phone “a number of times” with former Boston Red Sox General Manager and current Chicago Cubs Director of Baseball Operations Theo Epstein about the use of analytics, but won’t divulge how his own club’s decisions are based on the statistical resources that they’ve compiled.

“Like if you have a secret formula, why would you tell the world about it if you’re trying to win? You know what? Here we come.”

“It’s unbelievable, that question now,” Lombardi said about the analytics discussion. “Every guy from Toronto’s calling me now because they did it. So all their writers call. There’s a perception out here that we have the Holy Grail – some magic formula – that that’s why we’re winning, and Lombardi’s got this blah blah blah. And so, just like you’re talking there, it’s not only the way you play, right, that they copy you, but now they want to know what you’re doing. So, yeah, maybe we have been [using analytics]. But don’t forget, too, like I’ve always said. There’s a big difference between data and knowledge, and how you use it. Be careful. And the other thing, too, is that you’ll never convince me that emotion isn’t a huge part of this game, more than any other game.”

While advanced stats clearly have a primary place in player evaluation, there’s still no formula to determine a team’s emotional investment. While the Kings and Blackhawks grade quite well in possession metrics, they also grade well in incalculable intangibles: character, expectations and compete level.

“If you have two teams like this, this one’s clearly better than this one,” Lombardi said, placing his hands at two different levels two feet above his desk. “But if [the lower] team is emotionally charged, I think in hockey they can close this gap more than any other sport. So unlike baseball, where if I’m the Yankees, and [there’s a lesser team], [the lesser team] can be emotionally charged, but how much can you really close that gap? I’d say the same thing in basketball to a certain degree. I think, yeah, rebounding, there’s some of those types of things. But I think in hockey, it’s huge. So if you get a little too wrapped up [in analytics], be careful.”