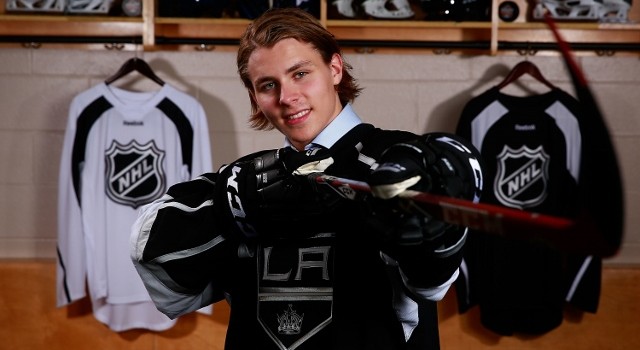 The Los Angeles Kings will hold their annual Development Camp at Toyota Sports Center next-week, with on-ice workouts beginning on Monday, July 7. This will be your first opportunity to see the newest Kings prospects in person, including 2014 first round draft pick Adrian Kempe. Because this is Development Camp, and not Rookie Camp or Training Camp, the Kings’ college-based prospects are able to attend without losing their amateur status.

Several observations of the camp invites:

-Stephen Harper is a converted defenseman who was previously a first round pick by Erie in the OHL priority selection and put up 24 goals and 35 points as a 16-year-old rookie in 2011-12. He also has the same name as the Canadian Prime Minister, so good luck Googling him.

-Taylor Burke has captained Gatineau in each of the last two seasons; considering he’s eligible to return to the Olympiques for his overage season, it’s not a stretch to expect that he’ll become a three-time captain this coming year.

-Another captain: Kevin Raine. Raine played out his OHL eligibility as Sudbury’s overage captain this past year before joining AHL-Portland for five games and recording one assist.

-Holden Cook had some of the more impressive stats of the camp invites, having more than doubled his 2012-13 point total with 28 goals and 57 points with Owen Sound last year. He’s listed at 6’1, 190 pounds by Elite Prospects.

-Patrick Newell played for the now-dormant Indiana Ice team that won the most recent USHL Championship. He’ll spend the upcoming year with the USHL’s Tri-City Storm before heading to St. Cloud State in the fall of 2015.

-With Newell reinforcing the St. Cloud pipeline (as an invite), the Kings are beginning to build a new pipeline in the province of Ontario. Defenseman Roland McKeown and forward Spencer Watson were drafted out of Kingston, so Conor McGlynn, a 6’2, 200-pound center who posted 12 goals and 20 points, will become the third Frontenac at this year’s camp.

-Jordon Cooke used to kill us while I was in Everett (and probably continued to do so after I left). The undersized goaltender who ran out of eligibility following a successful four-year run with Kelowna (where Kings Goaltender Development Kim Dillabaugh serves as an assistant coach), Cooke was 39-7-0-4 with a 2.28 goals-against average and .922 save percentage for a Rockets team that advanced as far as the 2014 Western Conference Final. His 2.28 GAA ranked second best amongst qualifying WHL goaltenders.