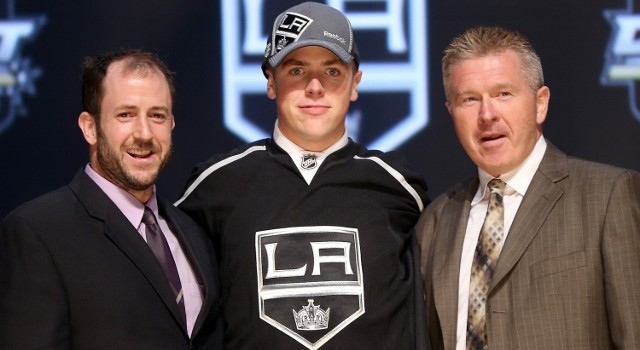 The Los Angeles Kings have had success under Dean Lombardi in targeting eventual National Hockey League players who went undrafted in their first year of draft eligibility. Tanner Pearson is the most recent example; after passing through the draft twice, he was selected in the first round of the 2012 NHL Draft and made an impact with the Kings by posting 12 points in 24 games in the 2014 Stanley Cup Playoffs. Wayne Simmonds and Jordan Nolan are other players with multiple years of NHL experience who were drafted by the Kings in the Lombardi era after their first year of draft eligibility, while defenseman Colin Miller and goaltender Patrik Bartosak are intriguing prospects drafted out of junior hockey after their 19 year-old seasons.

With the success the Kings have had in finding value in players that have passed through the draft at least once, and because the Kings have won two of the last three Stanley Cups, will other teams start to emulate this aspect of the Kings’ drafting strategy?

“Yeah, without question, and not that you like to say you’re a trendsetter, [but] I think guys are starting to understand normally – and I said it before – when a scout does that, they’re admitting they made a mistake or they missed somebody, right? When you have Tanner Pearson in the seventh round, and then take him at 29, you better be right because you can’t change the way the list was the year before. You’ve got to be sure about what you’re doing. So I think guys now, we started it with Simmer, taking him at the end of the second, and then it almost became around the middle of the third – that’s where the 19-year-olds started to fall that had been through. If you like a guy that much – because we’re not concerned. I think, again, I’m not saying we’re trendsetters, but now we did it in the first round. So it’s taking the ego out of it. If we think he can play, he can play. It doesn’t matter where you get him.”