Remember that “goal” in Detroit? 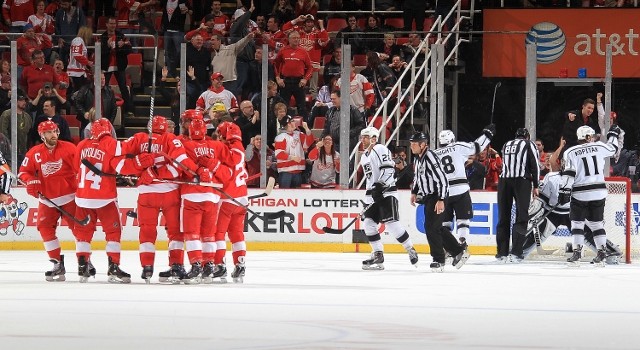 You know the goal I’m talking about…

Under NHL Rule 38.4, that’s not a reviewable goal. But after today’s Board of Governors meeting, it appears as though it will facilitate a rule change in which goals that “clearly were not scored in a legal fashion,” as Dan Rosen of NHL.com wrote today, will not be allowed.

The Board of Governors also approved the recommendation to give the Situation Room in Toronto more latitude to review goals that may not fit one of the review categories but clearly were not scored in a legal fashion. This is under rule 38.4 in the NHL Rulebook, Situations Subject to Video Review.

An example would be the game-tying goal scored by the Detroit Red Wings against the Los Angeles Kings on Jan. 18. Niklas Kronwall’s shot was deflected off the mesh, came back into play, hit goalie Jonathan Quick’s back and went into the net. Under the current rule that goal was not subject to video review, but if this change is approved the Situation Room would be allowed to review the goal and make a ruling on it.

In other news from today’s meeting, the NHL and the NHLPA are expected to announce next year’s salary cap ceiling on Friday. For more on that and potential changes to NHL rules, Rosen’s NHL.com report is a necessary read.

For more on potential changes to the draft lottery system, which would provide a more even chance of non-playoff teams to obtain the first overall pick, click here.