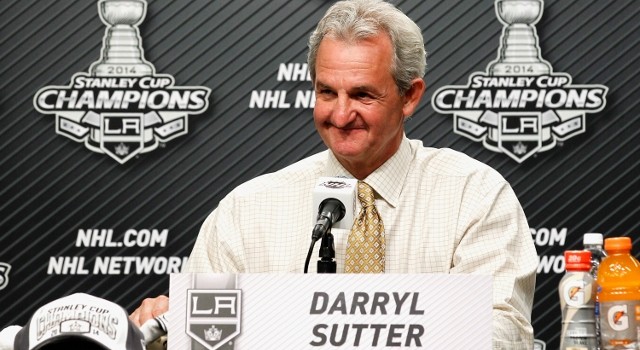 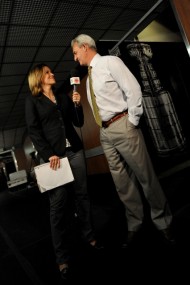 There’s really no pithy description of a Darryl Sutter press conference. Though they’ve certainly gained widespread recognition for the occasional dry and sarcastic responses, the heavy majority of his answers are informative, and it’s the longer, well-constructed answers that are the most appreciated and insightful, not the four or five word sound bites.

And as noted last year, it’s imperative to understand that Darryl is a coach who will always have the best interests of his players in his heart, and while some of the sharper responses populate much of the list, there are many comments that may not stand out on a page but still express the work, sacrifice and commitment that bonds him with his players. Whether speaking glowingly about Anze Kopitar or saying that “Anybody that was on our championship team last year is a member of our family forever, so I want them to do well,” the sanctity of the relationship between those within the room is clear and pure.

So, the quotes. This is the second and final reflection of Darryl’s best quotes of the season. As noted yesterday, his comments after Los Angeles’ 3-2 shootout loss on January 18 when a puck bounced off the protective netting behind their goal, off Jonathan Quick, and into the net, are in their own class. They’ll lead off the post again today, in case anyone missed them yesterday.

25
April 28
On whether there’s a reason behind the surplus of playoff comebacks:
No. When it’s all said and done and you’ll add it up – I know you’re really good at the math and analytics – you’re going to add it up and take out empty nets, and it’s going to be three-two. That’s what it is.

24
April 30
On whether certain players “woke up” midway through the series:
No, I thought we played really good in Game 2. I think, quite honest, at the end of the day, San Jose thought they were going to beat us easy.

23
March 10
On “coach’s challenge” technology:
We can do that in a second with Facetime. You’re not slowing the game down.

22
June 8
On whether he takes any credit for his team’s “mental toughness”:
No, I’m not very mentally tough. I can barely get through it.

21
January 6
On Mike Gillis commenting to reporters on Dustin Brown’s contact with Roberto Luongo:
That’s wonderful that they would quote that. Quite honest, that’s [road apples]. It is. It’s [road apples]. Don’t get me going on it.

20
January 4
On coaching his 1,000th regular season game:
Quite honest, lockouts and games played, and managing, all that, it was way [more], thousands. That’s friggin’ nothing. That’s like the warranty going off.

19
April 28
Opening statement:
How’d you guys stay up so late for me for? I was friggin’ halfway home to Manhattan Beach. They phoned me, and I had to do media.

17
March 11
On the nearly 200 heads of cattle that had been born on his farm in Viking, Alberta:
Yeah, you’ll keep breeding stock – meaning females – that are good, and you’ll keep some good males for breeding stock, and then you’ll get the rest at Ralph’s.

16
December 23
On Dustin Brown’s illness:
Basically, he was puking all night, unless you talked to him – did he tell you he wasn’t? I mean, I don’t usually talk to guys when they’re puking.

15
December 7
On the pre-game ceremony:
It’s not really that big a deal. I mean, we’ve had enough. Quite honest a lot of times when they’re singing the songs before the game it seems like an audition. You get used to it. It’s California.

14
May 4
On the surplus of postseason comebacks:
Somebody’s coming back. It’s not rope ‘n ride.

13
January 9
On whether he’ll wear the boots presented to him in a pre-game ceremony:
Aw, hell. I thought I was going to get a tractor.

12
November 22
On Matt Frattin wearing a protective mask:
It’s what I was telling those guys – that cage he was wearing yesterday in practice – when they put them on horses, that’s ‘cause they crib. The horse will crib. So that’s what I told him – you’re a racehorse now.

11
December 31
On the officiating:
I mean, quite honest, do you think the penalties should’ve been five-two tonight, or could they have had one more? That’s what I was hollering at the referee about. We had one referee that we had last night in Chicago. He looked fatigued tonight.

10
March 3
On the attention paid to the trade deadline:
Quite honest, there are guys that think it’s a big day because they get interviewed more. It’s a big day for some guys. They get cameras.

9
December 18
On the penalty box:
They’ve got like four guys sitting over there, and room for like six other people to sit. They’re the best seats in the house, right at center ice. Like, if it was a football game, then that’s the best seat. I don’t get that [any] more. Really, it’s like a three-penalty-team a game now. Why do they make that deal? Why do they get that big place for there? When I was coaching Brett in novice when he was little back home, and he’d get penalties, I’d go, ‘Brett, you’re little. Why do you go over there and sit? Why do you want to go there?’ He says, ‘I can see better from there.’ [Reporter: How old was he?] He was just little. It makes sense, right? He could see better. When you think about it, I’m probably right for once.

6
May 20
On the Star Trek convention at the Chicago hotel the previous year:
A lot of our players didn’t know what all them guys walking around in blue tights were.

5
April 24
On the response he expects in Game 5:
We’re going into the cage. Cages are a good thing.

4
January 21
On whether the Calgary-Vancouver incident was “embarrassing” for the NHL:
Yeah, that’s what it said in the papers, so I’m consistent with what you guys say.

2
December 14
On the keys to facing Chicago on the second night of a back-to-back:
Get there on time. Beat the weather. Get through customs.

1
April 22
On falling behind three-nothing to San Jose:
It’s a tough hill, and we won’t go quietly away, that’s for sure.