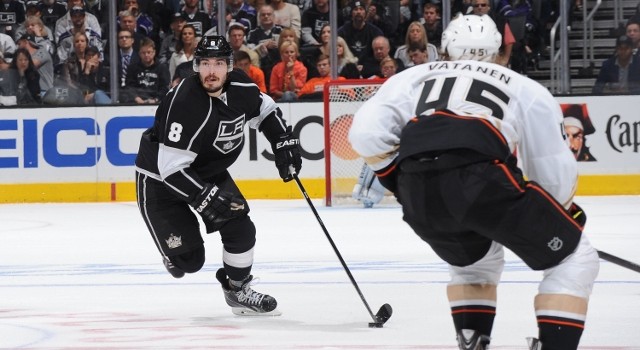 I know there’s not a surplus of Kings fans who are living on every word that Bob Murray has to say, but there were some interesting comments from Anaheim’s general manager earlier today. Speaking with reporters, Bob Murray related Drew Doughty’s ascension to becoming a “superstar” as a part of a championship blueprint. It’s an interesting take on roster construction, and while there has been more news coming out of San Jose (amongst divisional rivals), Anaheim’s summer plans as articulated by Murray is a recommended read.

On the missing pieces to the puzzle
There are two or three. You watch the Kings, for example, and you watch how Drew Doughty has emerged as a superstar. Do we have a defenseman who can be that way? When we won the Stanley Cup, we had Scotty and Chris [Pronger]. That’s in the back of my mind all the time. Where is that guy, can you find that guy, and can you afford that guy? There’s also a center iceman. Is the time now, or do we have to step back and wait to see how these kids develop? It’s a little bit of a game right now in terms of where you really are.