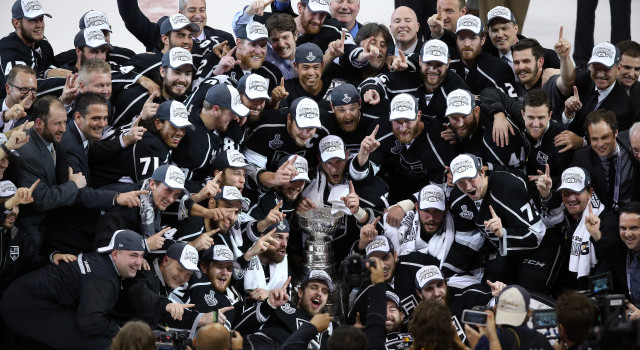 The Los Angeles Kings finished in third place in the Pacific Division in both of their Stanley Cup-winning seasons, finishing behind the Phoenix Coyotes and San Jose Sharks in 2012 and the Anaheim Ducks and Sharks in 2014. Three of those four teams succumbed to the Kings in Los Angeles’ Cup triumphs.

Though only three teams made the playoffs out of the Pacific Division in 2013-14, there were also three teams with raised work ethics and that are difficult to play against that missed the playoffs in Phoenix, Vancouver and Calgary.

“I mean, there are so many good teams,” General Manager Dean Lombardi said. “I mean, let’s get real here. You look at our division. I mean, the one thing about this playoff, the Pacific Division is so underrated. They never got any credit. I mean, all the teams in our division almost made the playoffs two years ago, and somebody looked at me and said ‘It’s a weak division.’ I said, ‘No, it’s the other way around.’ It’s when one team’s in the playoff hunt, not when all five. Phoenix is going to be back, San Jose and Anaheim are great teams, and obviously Chicago, St. Louis. It’s a war out here. It’s a war of attrition to get out of this conference. There are some really good teams in this conference.”

The Central Division was just as competitive, if not more so. Winnipeg, the seventh place team in the Central, would have finished in fifth place in the Pacific and was still battling for a playoff spot under Paul Maurice with a month to play in the season. Five teams made the playoffs out of the Central Division, with the emerging Colorado Avalanche shaping up as an eventual superpower with a terrific amassment of young forwards and the likely Jack Adams Award winner in Patrick Roy.

But the Kings traveled through two of the top teams in hockey to get out of the Pacific Division, defeating 111-point San Jose and 116-point Anaheim. That left them in a Conference Final match-up against defending champion Chicago, a 107-point team that did not lock down home ice advantage in the first round of the playoffs.

And despite the lack of division titles won since 1991, it was the Kings that remained standing at the end, having left a trail of superpowers in their wake. We’ve heard Darryl Sutter refer to division titles as “dirty banners.” Does raising one really matter at this point?

“Well, I think it’s pretty safe to say we believe in a little bit of Canadian ideology when it comes to playoff hockey. And that’s sometimes that when you’re playing three-in-four nights, it’s not easy to play that way,” Lombardi said. “But you need both. The thing is, too, that’s where Gaborik and Carter and these guys [come in] – the one thing they did, it’s not just Marian, it’s the fit in how it raises other people up, and I think there’s still a challenge for this team to mesh the two. When we won it two years ago, it was like the Pittsburgh Steelers. It was all defense, their first Super Bowl. If you looked at it at when they got the Super Bowl, I think they set a record for giving up a half yard a carry. And then two years later when they won it again, they integrated Swann and Stallworth, but they had to find a way to make sure they were good at both but never lose the Steel Curtain’s identity. So, that’s still a challenge. We have not been at that level in the regular season. We want to be good defensively, we never want to give up more than two goals per game, but you’ve still got to do both if you’re going to be there year in and year out. The Red Wings, the Avalanche, the Dallas Stars during that era, they weren’t weak anywhere. They didn’t just rely on one thing, and so we’ve still got some work to do to make sure that we find the right balance there, and, like I said, the youth of this group, I think we’ve got a good shot of keeping them together next year. And I don’t think Darryl will let ‘em get complacent. That’s probably pretty impossible.”