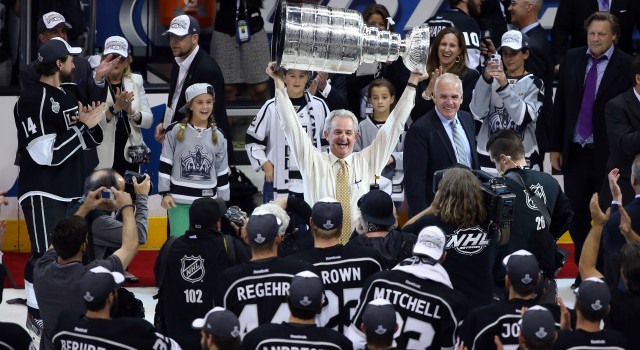 On an inclination in 2012 that the team would be capable of winning multiple Cups:
We did it a different way in ’11-12. That’s something that I don’t think could ever happen again if you go back to that because of winning as a road team all the time. This year was totally different. A lot of new players in our lineup. We knew we had to at some point. During the Olympics, I always thought about this, ‘How are we going to beat Chicago? How are we going to beat Chicago?’ Dean got Gaborik. We were able to put some kids in, go from there.

On the comebacks, Game 7s and resilience:
Yeah, I think it takes a lot of effort and will. But I think once you did it as a group, the nucleus of your team, I’ve said it lots and we talk about it lots in the room, the winning and losing part of it. It sounds off the wall, but a lot of times when you lose a game, you’re actually winning in a lot of other areas and you just believe in it. It showed up again tonight. I mean, just over and over and over,
went through it. We had to switch guys around tonight. Just started gutting it out. I told some of the players, ‘Should we win the Stanley Cup this year in a different way, it just tells you we actually got better.’

On whether Dustin Brown handing the Cup to Robyn Regehr is an indication of the team’s camaraderie:
I told Robyn that last night. Again, it goes back to last year, we got beat in the Conference Finals. Robyn got out of the hospital, played games, had to go back to the hospital, played games. He’d been out so long, that’s your biggest concern. Quite honestly I thought about it again this morning, about how much trust you have in everybody. Like Jeff Schultz gave us. Willie, Greene and Robyn in the playoffs didn’t play every game. It just tells you that need a lot more than the six. By Brownie doing that, it tells you how they feel about each other.

On whether he saw the game-winning goal:
I couldn’t see it. Basically at that point the players are in sort of attrition, trying to get 20 or 30 seconds each. There was some ebb and flow in overtime, but I think our whole game was very consistent in terms of we were good in the first shift, we were good in the 20th shift, we were good in the 30th shift. This team, you’ve got to give them lots of credit. Tonight is their 26th game. Is it 26? I’m not so sure that will ever happen again. You talk about 26 games plus how many overtimes. We probably played close to 30 games since the 20th of April. That’s pretty significant. You’ve got to give these guys full marks.

On the New York Rangers:
You know what, somebody said, Congratulate Glen Sather and the New York Rangers, what they did this year, what they accomplished. It’s a difficult road. The key is, you make the playoffs, you win the Stanley Cup, you’ve got to do something special to get there. To get through three teams in your conference is very, very significant. Then to play each other, it’s like a whole new schedule again.

On Justin Williams winning the Conn Smythe Trophy:
It’s fitting. His third Stanley Cup. It’s great for Willie. You could see how emotional he was about it. But we had 29 players. You could put 29 players on it.

On whether he could hear the fans chanting “We want the Cup!”:
They say that all the time. They get spoiled (smiling).