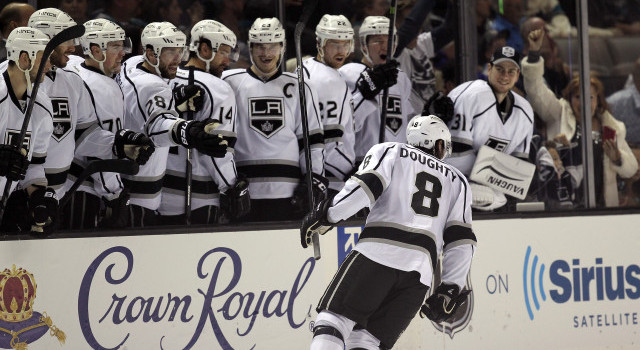 Drew Doughty is honest and emotional and wears what he is feeling on his sleeve.

Take, for example, this quote from April 29, the day after the Kings tied the Sharks at three games a piece in the first round:

“Last night I couldn’t sleep – I’m just so excited for this game. I have to go get a nap in today and get better sleep tonight because I’m a little tired this morning. I just can’t wait to get it going. It’s an unbelievable atmosphere in that arena. When we come out on the ice and they’re going to be booing us like crazy right off the bat, it gets the goose bumps going and gets you excited for the game and gets you excited to hopefully beat that team in their rink. I know everyone is looking forward to it.”

And then, on May 16, he described his feelings heading into Game 7 of the Anaheim series:

“It might be a little different. We don’t like this team either, but we hate San Jose, in a way. We have to take the same approach. We have to do whatever it takes to make this team lose this game tonight. Whether it means you have to pretend you hate someone so much so you want to beat them, or just in any way, shape or form, just be completely ready for this Game 7 and be completely ready to beat them. They’re going to be hungry. We just have to be hungrier and more competitive. That’s how we’re going to win.”

Though his quotes were a touch more subdued heading into Game 7 of the Chicago series, his passion was certainly stirred earlier today as he made it clear he can’t wait to play Game 4 tomorrow night.